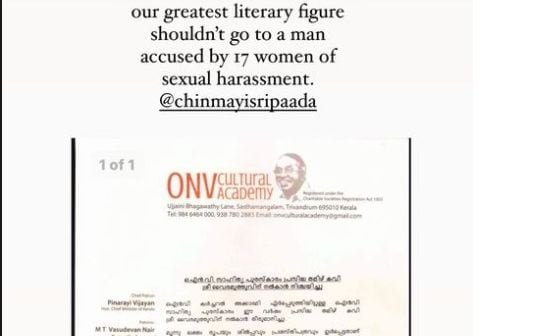 “ An award in the name of one of our greatest literary figure should n’t go to a man accused by 17 women of sexual harassment,” wrote Rima Kallingal on her Instagram stories. 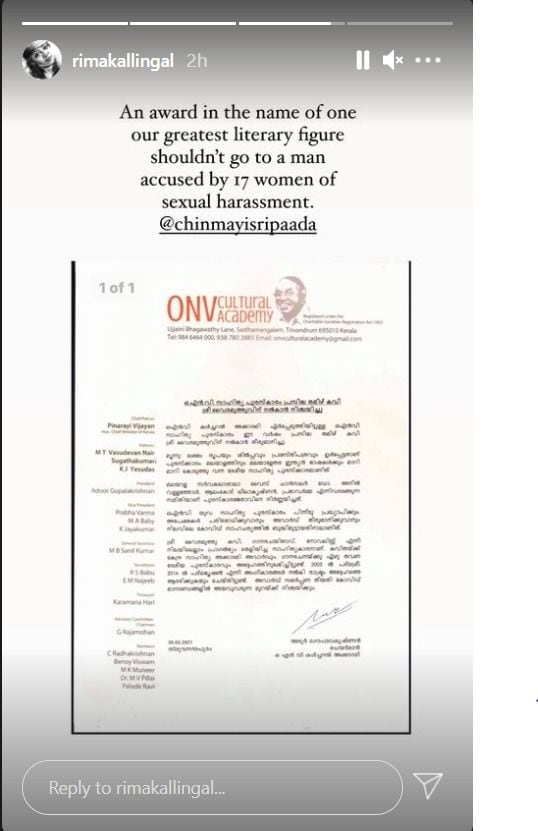 In the long post on Instagram, Parvathy sought an explanation from the ONV award jury chaired by veteran director Adoor Gopalakrishnan for selecting Vairamuthu for the award.

She pointed out that presenting the award to Vairamuthu is a disrespect to ONV.

“ONV sir is our pride. His contribution as a poet and lyricist is incomparable; how it nourished our culture. Our hearts and minds have benefited through his body of work. This is exactly why it is immense disrespect to give such an honour in his name to the accused of sexual assault crimes,” wrote Parvathy.

17 women including popular singer Chinmayi Sripada raised sexual harassment allegations against Vairamuthu with 'me too' movement. Pointing out this, Parvathy urged the award jury to give priority to humanity than anything.

“17 women have come out with their stories. We don’t know how many more have been wronged. There seems to be enough whataboutery to continue wronging those who are wronged. Only to uphold the reputation of those in power. Nothing is more important than humanity. If you come at me with the art vs artist debate, let me tell you that for me the humanity of the person creating the art is the only thing I’d choose to look at. I can live without the “art” of those who hollow out lives with absolute impunity,” Parvathy added.

In October 2018, singer Chinmayi raised an allegation of sexual harassment against veteran Tamil lyricist-poet Vairamuthu by sharing her own story on how she was asked to "cooperate" and visit him in a hotel.

After endorsing allegations of sexual harassment against Vairamuthu by several users on Twitter in the wake of #MeToo movement, Chinmayi shared her own story to corroborate the reports.

In a series of tweets, Chinmayi recalled an incident where she alleged that the concert organiser asked her to cooperate and visit Vairamuthu in his hotel room.

ME TOO ALLEGATION AGAINST VAIRAMUTHU