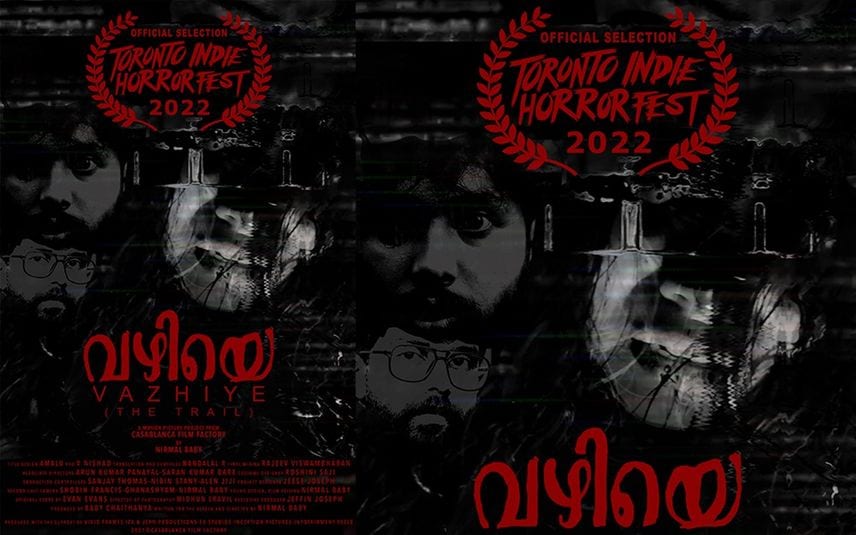 Malayalam movie ‘Vazhiye’, directed by Wayanad-based filmmaker Nirmal Baby Varghese, has been entered to the Toronto Indie Horror Fest in Canada which takes place on May 10-13, 2022. This festival started in 2016 to showcase independent horror movies from around the world.

The horror thriller is written and directed by Nirmal Baby Varghese and produced by Baby Chaithanya under the banner of Casablanca Film Factory in association with Vivid Frames. Midhun Eravil is the cinematographer and Jeffin Joseph is the executive producer. Editing and sound designing was done by the director himself. The second unit camera is cranked by Shobin Francis, Ghanashyam and Nirmal (Director). Jees Joseph is the project designer and Sanjay Thomas Chowattukunnel, Nibin Stany, Alen Jiji are the production controllers. Arun Kumar Panayal and Saran Kumar Bare are the associate directors.

V Nishad is the PRO and final mixing was done by Rajeev Viswambharan. Translation and subtitles were written by Nandalal R. Amalu is the title designer and still photography was handled by M E Photography, Social media promotion: Asha Manoj, Infotainment Reels. Costume design was done by Rohini Saji.

Producer Baby Chaithanya is also the elder sister of director Nirmal. Chaitanya also produced the documentary Thariode for her brother. Both have won Kerala State Television Awards and other international awards for their documentary. They are the children of Baby PK and Lily Baby, residents of Kavummannam, Wayanad.