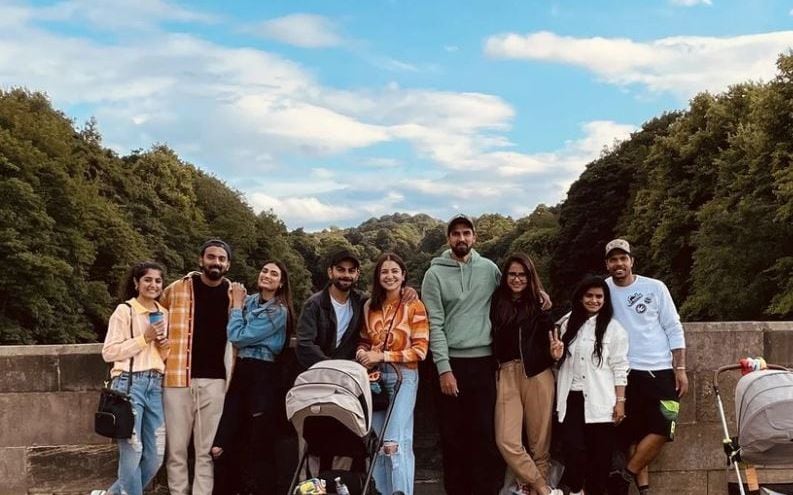 London : As the India-England Test series is still six days away, the Virat Kohli-led side is enjoying some time off the field, and few members are utilising the few days left to spend time with their partners.

Treating her fans to what they have been eagerly waiting to see, Bollywood actor Anushka Sharma shared one of the most adorable group pictures from Durham, the UK on Friday.

In the adorable snap shared by Anushka on her Instagram handle, she could be seen posing for a group picture with the rumoured couple KL Rahul and Athiya Shetty, Ishant Sharma and his wife Pratima Singh, Umesh Yadav, and his wife Tanya Wadhwa, senior producer at BCCI- Rajal Arora and not to miss the cute baby strollers of Virushka's 6-month-old daughter Vamika and Umesh and Tanya's nearly 1-year-old daughter!

India and England will lock horns in the Test series from August 4 in Nottingham. Last week, the Indian side played a three-day warm-up game against County Select XI.

Speaking about Virushka, the duo got married in a fairytale wedding that was only attended by the couple's family and friends on December 11 in 2017. Post their nuptials in Italy, they hosted grand receptions in Delhi and Mumbai. The couple had reportedly first met on the sets of a commercial and dated for four years before getting hitched.

On January 11, the duo welcomed their daughter at Mumbai's Breach Candy hospital. Last year in August, the star couple had announced that they were expecting their first child in January 2021.