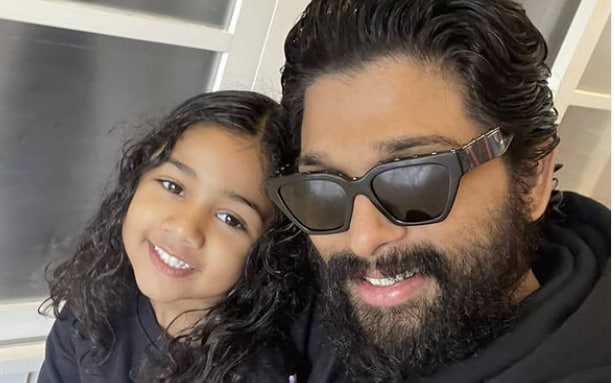 Hyderabad:Telugu star Allu Arjun's doting little daughter Allu Arha is quite a celebrity in the Telugu states. He keeps his fans and followers on social media updated with Arha's cute videos and pictures.

These posts also garner lakhs of comments and likes, and hence Arha is a already a star with much craze on social media.

Allu Arha celebrated her birthday on Sunday. Allu Arjun and his wife Sneha Reddy had arranged a big fat party on the occasion. Allu Arjun, Allu Sneha Reddy, Allu Ayan, Arha, and other young members of the family had flown to Dubai, where they are currently enjoying their stay.

Allu Arjun has thrown a lavish party to celebrate his cute daughter's birthday. Allu had booked a lavish spot on Dubai's iconic building Burj Khalifa for the occasion. Apparently, the tallest level of the building is not open for the general public and Arha's birthday party is the first party to be celebrated here.

Allu Arjun, the happy father, took to his social media websites to post an adorable picture with Arha. He also wrote a heartfelt message which reads, "Happy Birthday My Lil Princess. I love sooo muchhh na chinna baby. May this year be filled with lots n lots of Colouring, Drawing & Travelling."

Arha, on the other hand, is all set for her debut in the movies. Allu Arha is to appear in Samantha Ruth Prabhu's upcoming epic movie 'Shaakunthalam'. Directed by Gunadsekhar, 'Shaakunthalam' is to feature Arha in the role of Prince Bharata. The team also released a special birthday video, which features Arha on the sets of 'Shaakunthalam'.