The film will have a global release through OTT giant Amazon Prime Video on August 19. 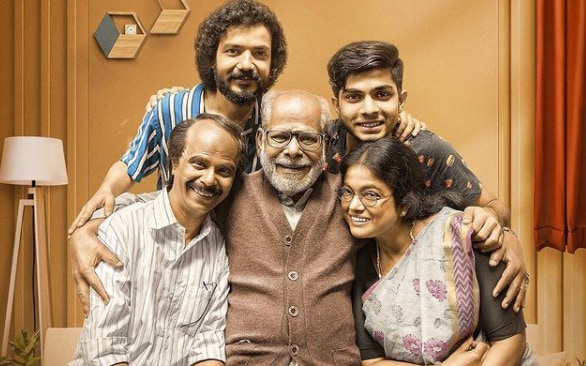 The film, which is directed and written by Rojin Thomas is a light-hearted, thought-provoking drama.

The film will release under the banner of Friday Film House, and is produced by Vijay Babu.

Actor-Producer Vijay Babu said, "With '#Home' our focus was solely to highlight a socially relevant topic with a point of view portrayed in such a way that it leaves viewers with food for thought. The beautifully relatable characters have been carefully weaved into the narrative and presented in a light-hearted way that will make for a perfect family watch."

'#Home' is the story of a humble but technologically-challenged old man, Oliver (essayed by Indrans), who tries constantly to keep up the closeness with his two sons, who are hooked to social media like any other millennial. The film focuses on a socially relevant and relatable theme with a light-hearted and beautiful narrative.

Talking about the film, Rojin Thomas said, "'#Home' is an attempt at depicting a much relevant topic in today's times, the dynamics of a family that is unknowingly trapped in the artificial web in the ever-evolving digital age."

The film will have a global release through OTT giant Amazon Prime Video on August 19.

"The high-anticipation for soon-to-launch 'Kuruthi' and unprecedented success of recent Malayalam movies on our service is a testament of the rising affinity for this cinema across the country," said Vijay Subramaniam, Director and Head, Content, Amazon Prime Video, India.

He adds: "We are extremely glad to collaborate with Friday Film House again and support us in our continued efforts to bring well-crafted stories from Malayalam industry to a larger audience on Amazon Prime Video. With an emotionally stirring plot and authentically nuanced storytelling, #Home will make for an ideal film for the entire family to watch together and will certainly tug at their heartstrings!"