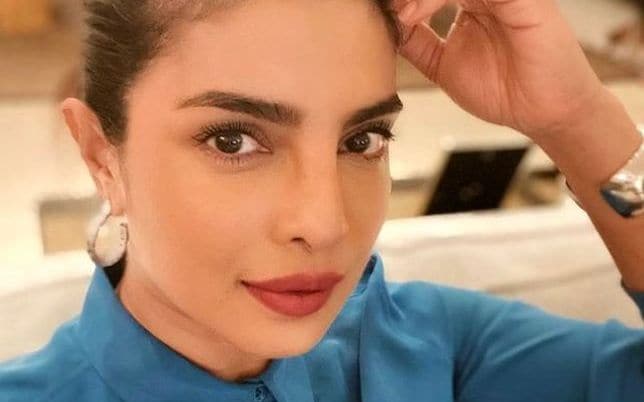 Mumbai: Actor Priyanka Chopra Jonas says that people should embrace streaming platforms because they have not only allowed the audience to consume diverse stories but also democratised the film industry.

Priyanka who made her digital debut with Netflix movie "The White Tiger" this year, said that streaming services have made artistes think outside the "formula" of a Bollywood film.

"That's what you're seeing in Indian cinema - the freedom of streaming services is allowing people to have larger thoughts than the formula that existed before.

"That there should be five songs, a fight sequence. That formula has gone away. Now people want to tell great, real stories, with which they identify," the actor told reporters.

Priyanka was speaking at a virtual press conference of streaming platform ZEE5's launch in the US, late Tuesday evening. The launch announcement was made by Archana Anand, Chief Business Officer, ZEE5 Global.

The 38-year-old actor said the boom of the streaming services, particularly in India, has broken down the monopoly of a "specific number of people", resulting in newer storytelling.

"It's amazing because it gives new writers, actors, filmmakers an opportunity to come into an industry that was monopolised for a long time by very specific number of people. It's a great time for growth, entertainment and specifically for Indian cinema," she added.

While nothing can be compared to a theatrical experience, the actor said the OTT platforms have brought in a remarkable comfort to the audience.

However, Priyanka firmly believes that the current OTT boom is not an indicator that the "theatrical is going anywhere".

"The freedom that streaming has provided to the audiences around the world is that you can watch a movie at the comfort of your homes. That's amazing.

"It's spreading culture, teaching people, educating them, there's a large, new audience that is being exposed to all kinds of Indian cinema," she added.

The Indian film industry is going through an "exciting time" and people should wholeheartedly "embrace streaming as much as we can", Priyanka Chopra Jonas said.

"It's not the future, it's the present," she added.

At the event, Priyanka also said that as an Indian actor-producer working in Hollywood, she wants to use her power to create more space for South Asian artistes on the global stage.

"I have been one of the very few people who have had the privilege of being able to be in the entertainment business in two of the largest entertainment industries in the world.

"My quest is to be able to create more recognition, representation and to be able to have South Asians feel seen and heard, especially within the international community outside of South Asia," the actor added.

As part of the launch, ZEE5 unveiled its line-up of Originals and other films across languages to release on the platform in the coming months, which included filmmaker SS Rajamouli's much awaited "RRR" post its theatrical release.