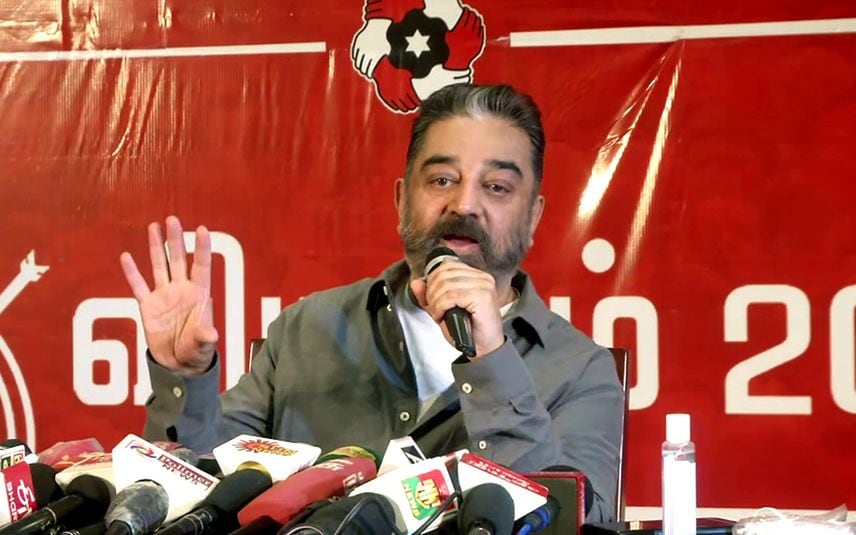 Madurai: Makkal Needhi Maiam (MNM) chief Kamal Haasan, who kickstarted his party's campaign for the upcoming Tamil Nadu Assembly polls on Sunday, has said that he will "definitely" contest the upcoming elections and will announce the constituency later.

The Tamil Nadu Assembly elections are likely to be held in April-May next year.

"There are various criticisms against the ruling party, which has refused us permission to campaign because of the growing support for us. Since Madurai is the closest town for me, I started campaigning here and will definitely contest the Assembly elections," the actor-turned-politician said after meeting businessmen and advocates at a private hotel on the second day of his visit to the city.

Haasan's remark is significant as his party, launched in February 2018 in Madurai, faced a drubbing in 2019 Lok Sabha elections but he recently claimed that it emerged as a third front in Tamil Nadu.

Asked if he was in talks with other parties to form the third front in the state, the 69-year-old said it is a party secret. "It will not be good to divulge it now. We will announce it soon."

Asked if he would stitch an alliance with Rajnikanth he said, "We both had clear separate paths which we pursued... We will have to wait till December 31 to answer it further. We were not competitors even in the film industry but an impression had been created to suggest that we are rivals."

The political temperature in the state has gone up after actor Rajnikanth announced earlier this month that his soon-to-be-launched party will contest the 2021 Assembly polls.

Emphasising that his party's election manifesto would give importance to a corruption-free government in Tamil Nadu, Haasan said, "Nothing could be changed by merely punishing people in the lower rung of the government. Things have to be started at a higher level."

On a minister's comment that people were gathering at his campaigns because he is an actor, he explained, "MGR and I are actors; people come to see me beyond the acting. Ministers go sleepless seeing the crowd."

The ruling AIADMK had announced last month that its alliance with the BJP will continue for the upcoming 2021 Assembly elections.