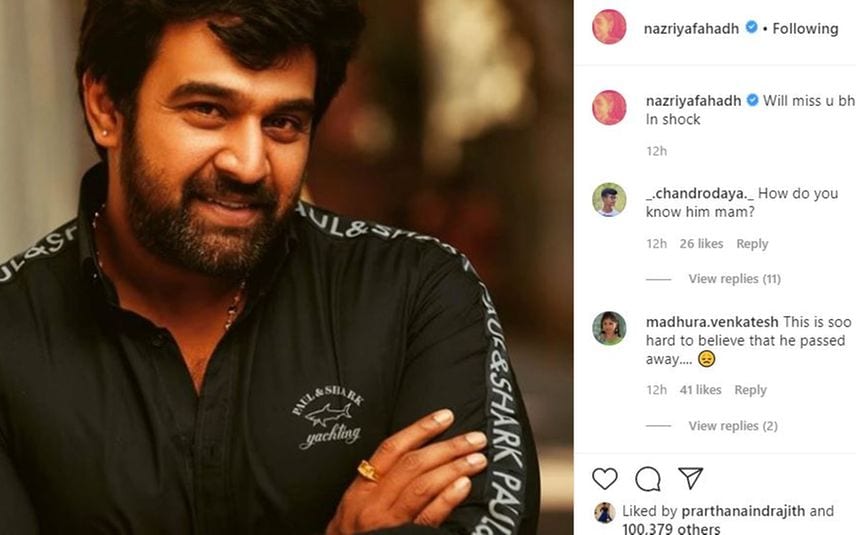 Mollywood stars expressed deep condolences on the sudden demise of Kananda actor Chiranjeevi Sarja. The actor who died at 39 is the husband of Jayasurya starrer ‘Beautiful’ actress Meghna Raj.

Actors Prithviraj, Indrajith, Jayasurya, Nazriya and others took to social media pages and paid homage to the actor.

“Absolutely devastated to hear about the sudden demise of Chiranjeevi Sarja. I pray Meghna and the whole family finds strength to tide through this shock and sorrow,” wrote Prithviraj.

“Will miss u bhai. In shock,” wrote Nazriya by sharing Chiranjeevi’s pic on Instagram. Chiranjeevi Sarja died at a private hospital here following a cardiac arrest, an official said on Sunday. He was 39.

"Sarja was brought to our hospital (Apollo) in an unresponsive state. Attempts to revive him failed and was declared dead by the doctors," the official told IANS here.

In a statement later, the hospital said Sarja was shifted to emergency room for treatment after he was brought to the hospital in an unresponsive state at around 2.20 p.m.

The doctors continued resuscitation to revive Sarja till 3.48 p.m.

"During the course, intravenous medications, inotropes and advanced airway was used, pulse was achieved three times, later continued to be asystolic. He was declared dead at 3.48 p.m.," added the statement.

Beginning his career in 2009 with "Vayupatra", Sarja acted in 22 sandalwood films, including "Shivarjuna", which was released weeks before the Covid-19 induced lockdown was enforced on March 25 and theatres have been shut since then.