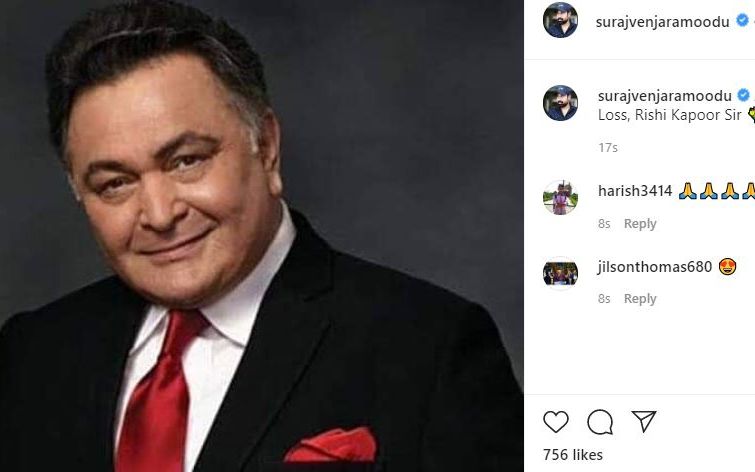 Film fraternity and the fans were shocked to hear about the sudden demise of veteran Bollywood actor Rishi Kapoor on Thursday. The 67-year-old actor was battling leukemia since two years. Mollywood stars Jayasurya, Kunchako Boban, Prithviraj, Nivin Pauly, Tovino Thomas and others took to social media pages to pay homage to the late actor. The stars shared pic of Rishi Kapoor on their social media pages and expressed condolences.

Kunchako Boban penned an emotional note for the veteran who was a yesteryear superstar.

“RISHI KAPOOR. The Prince Charming of Indian Cinema pass away!!!Can’t believe that, the “BOBBY Boy”who conquered our hearts and entertained us for decades is no more !!Thank you Sir for making us fall and rise in Love and Life,” wrote Chackochan.

Prithviraj was the first one among the Mollywood stars to condole Rishi Kapoor’s death.

“This is a sad sad week for cinema. Rest in peace RishiKapoor sir. Had the absolute privilege of working with him in #Aurangzeb Used to tell me he can’t call me by name as I shared it with his grand father. Farewell legend. We will miss you,” tweeted Prithviraj.

“Another great loss for the film industry! RIP Sir,” wrote Tovino Thomas by sharing an image of the veteran actor.

“Rishi Kapoor RIP. Was so madly looking forward to watching The Intern, which would have starred Him and Deepika. How I wish all that is happening this week could have been another way,” Ahaana Krishna penned on her Instagram page. She also shared an old photo of Rishi Kapoor with his son actor Ranbir Kapoor.

Unni Mukundan, Suraj Venjaramoodu, Indrajith and many others from Mollywood mourned the demise of the Bollywood star.