Draped in tricolour, Lata Mangeshkar embarks on her final journey 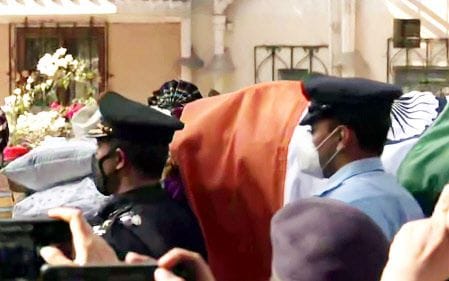 Mortal remains of legendary singer Lata Mangeshkar being taken from her residence 'Prabhukunj' for the cremation at Shivaji Park, in Mumbai on Sunday. Photo: ANI

Mumbai: The mortal remains of singing legend Lata Mangeshkar, draped in the national flag, were taken in a truck from her residence in south Mumbai to Shivaji Park in Dadar on Sunday evening for the last rites.

A large number of people thronged the roads from where the cortege passed as the 92-year-old melody queen embarked on her final journey.

The police and the Army gave a ceremonial salute and a band played the national anthem before her mortal remains of Mangeshkar were kept in the truck decked with flowers and a huge photograph of the singer.

Some of her family members, including sister and veteran singer Asha Bhosale, accompanied the mortal remains in the truck.

Maharashtra Protocol Minister Aaditya Thackeray was present on the occasion.

The truck, escorted by a military police jeep, will move through the Haji Ali junction, Worli Naka, Poddar Hospital Chowk, Old Passport Office, Siddhivinayak temple, Cadel Road and later reach the Shivaji Park in Dadar, where the singer's funeral will be held with full state honours.

Mangeshkar died in a hospital here on Sunday morning after multi-organ failure.