Aryan Khan to Prakash Jha: It's lonely and quiet in Bollywood 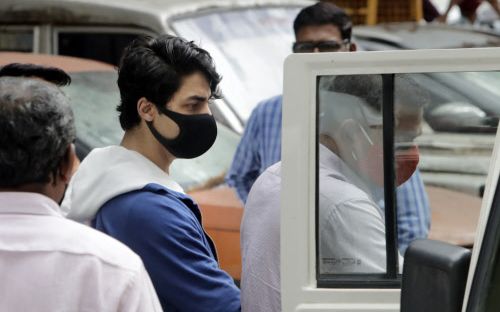 Mumbai: Bollywood star Shah Rukh Khan's son Aryan was granted bail in a drugs case on Thursday, ending more than three weeks of tension for the family that has been the subject of intense public scrutiny and also searching questions on power structures in the showbiz industry.

The show must go on… but at what cost? That was the question many were asking as some of the industry's most respected, including Prakash Jha and Aamir Khan, this month waged lonely pushbacks against attacks legal, verbal and physical -- the deafening silence of mainstream Bollywood adding to the high-decibel criticism from a vocal section online and elsewhere.

For much of October, all eyes have been on Shah Rukh Khan -- suddenly more a parent and less a superstar -- whose son was nabbed by the Narcotics Control Bureau (NCB) on October 3 in a case of banned drugs being seized aboard a cruise ship.

He was sent to jail on October 7 and had approached the Bombay High Court after the trial court refused bail. In the days that followed his arrest, actor Ananya Pandey was also questioned.

Some industry personalities, including actors R Madhavan and Swara Bhasker, welcomed the bail for 23-year-old Aryan. Since the arrest, Shah Rukh Khan has continued to receive support from his fans and some colleagues but most big players have been quiet.

For many insiders, the episode was an unhappy replay of October a year ago when actor Rhea Chakraborty was released on bail after 28 days in jail in a drugs case related to death of Sushan Singh Rajput and Bollywood struggled to fight off the taint of being a hub of drugs and other vices.

"I'm very happy that Aryan Khan has gotten bail but also very upset with a system that kept a young man behind bars for more than 25 days for something he never did. That has to change," filmmaker Sanjay Gupta tweeted.

Three days ago, he had said Shah Rukh Khan has and continues to give jobs and livelihoods to thousands, and has always stood up for every cause in the film industry.

“… the silence of the same film industry in his moment of crisis is nothing short of shameful,” filmmaker Sanjay Gupta said on Twitter. "Today it is his son. Tomorrow it might be mine or yours. Will all of you still say silent heartlessly?"

Away from the high octane publicity surrounding the son of arguably amongst the most successful stars of the Hindi film industry ever, others too have been under attack recently for reasons as varied as an OTT show on con godmen and an advertisement for tyres appealing for a crackers free Diwali.

Jha, the director of films such as “Raajneeti” and “Gangajal”, had ink thrown on him by Bajrang Dal activists who also ransacked the sets of his show “Aashram” on grounds that it portrayed Hindus in the wrong light. And Aamir Khan, one of the troika of powerful Khans along with Shah Rukh and Salman, was under attack for the Ceat tyre ad with BJP MP Anantkumar Hegde asking the company to also address the problem of roads being blocked in the name of ‘namaz' and noise from mosques during ‘azan'.

Several film personalities, including directors, actors and musicians declined to comment on record on the larger issues facing Bollywood when contacted by PTI.

However, filmmakers Hansal Mehta, Sudhir Mishra, Ashwini Chaudhary and producer Pritish Nandy, who are among the handful to unhesitatingly air their views, did speak.

Mehta, for instance, questioned Bollywood's "scared silence" in a tweet and wrote that its continued "deference" will only empower such "hooligans and further such oppression."

"But who will bell the cat?" the "Scam 1992" maker pointed out earlier this week.

Mehta, much like Jha, was at the receiving end of attacks in 2000 when his film "Dil Pe Mat Le Yaar" about Mumbai's migrant workers reportedly irked members of Shiv Sena who ransacked his office and blackened his face.

Interestingly, in 2016, Jha had called out filmmaker Karan Johar for his remarks on the growing intolerance in the country and had said there was "no situation like that in the country" and it existed only in Johar's "mind".

"Jaane Tu Ya Jaane Na" helmer Abbas Tyrewala captured the current mood in his viral Facebook post titled "They are coming for you".

"You think you're on their side? Wait till you do something they think is wrong. Make a show. Make an ad. Sing a song. Wear clothes. Meet a friend. Fall in love. Eat something. Drink something. Smoke something. Pray. Don't pray. Say something. Don't say something. Ask anything. Believe anything. Other than what has been 'sanctioned'.

"You may not be next. Not yet. But unless you're 'in' the mob, your turn and your family's turn and your children's turn are inevitable. There is only one 'them'. And it's all of us," Tyrewala concluded.

Shah Rukh and Aamir were among the first to comment on"growing intolerance" in the country in 2015, which led to theatres running SRK's film "Dilwale" being vandalised. Both the stars were also mercilessly trolled on social media, with calls of a boycott of their prospective projects made online.

In this latest period of crisis, Shah Rukh has found support from friends such as Hrithik Roshan who penned a note for Aryan and from Salman who hasn't spoken in public but has visited SRK's home Mannat.

Bollywood is not new either to vandalism or NCB attention.

In 2017, director Sanjay Leela Bhansali was assaulted while his "Padmavat" set was destroyed by members of Karni Sena, who objected to certain portions of the film. The group had also threatened to behead the film's lead star Deepika Padukone.

Similarly, the aftermath of Rajput's death (the actor was found dead in his apartment in June last year), triggered a political maelstrom against Bollywood. Premier government agencies, including CBI, Directorate of Enforcement (ED) and the NCB joined the investigation.

At the peak of the vicious social media negativity and in the aftermath of BJP's Lok Sabha MP and Bhojpuri actor Ravi Kishan's comments that there was a problem of drug addiction in the film industry, Rajya Sabha MP and veteran actor Jaya Bachchan hit out at those tarnishing Bollywood's image.

"It is a shame. Jis thali mein khate hai Usme chhed karte hai. Galat baat hai," she had said in her Rajya Sabha speech last September, referring to a popular Hindi proverb that translates to biting the hand that feeds you. PTI