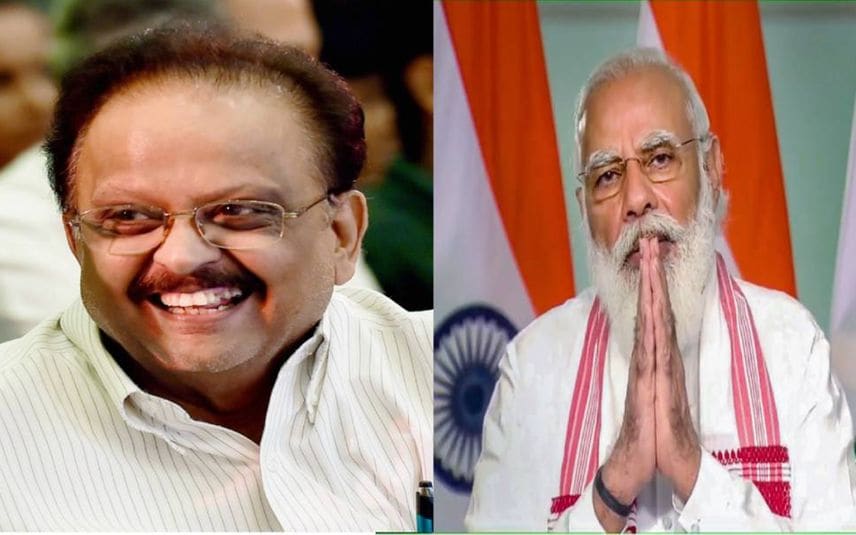 New Delhi: Paying rich tributes to legendary singer S P Balasubrahmanyam who died on Friday, Prime Minister Narendra Modi said that he was a household name across the country and that his melodious voice and music enthralled audience for decades.

Balasubrahmanyam, who held sway over millions of fans with his golden voice for over five decades, died at a Chennai hospital here where he was being treated for COVID-19 since last month. He was 74.

In his condolence message, Modi tweeted, "With the unfortunate demise of Shri SP Balasubrahmanyam, our cultural world is a lot poorer. A household name across India, his melodious voice and music enthralled audiences for decades. In this hour of grief, my thoughts are with his family and admirers. Om Shanti."
Indian music has lost one of its melodious voices in the passing of S P Balasubrahmanyam, who was also called 'Singing Moon' by his countless fans, President Ram Nath Kovind said on Friday, condoling death of the celebrated playback singer.
"In the passing of music legend SP Balasubrahmanyam Indian music has lost one of its most melodious voices. Called 'Paadum Nila' or 'Singing Moon' by his countless fans, he was honoured with Padma Bhushan and many National Awards. Condolences to his family, friends and admirers," the president tweeted.
Union Home Minister Amit Shah on Friday expressed grief over the demise of playback singer S P Balasubrahmanyam and said he would forever remain in people's memories through his melodious voice and unparalleled music compositions.

"Deeply saddened by the passing away of legendary musician and playback singer Padma Bhushan, S. P. Balasubrahmanyam ji. He will forever remain in our memories through his melodious voice & unparalleled music compositions. My condolences are with his family & followers. Om Shanti," Shah tweeted.

Memoir pays tribute to SPB on his first death anniversary

Remembering SPB after a year