After Lalit tweeted pictures with Sushmita, people started speculating if the couple is now married. However, Lalit cleared the air by putting another tweet clarifying that they are just dating. He wrote, "Just for clarity. Not married - just dating each other. That too will happen one day." 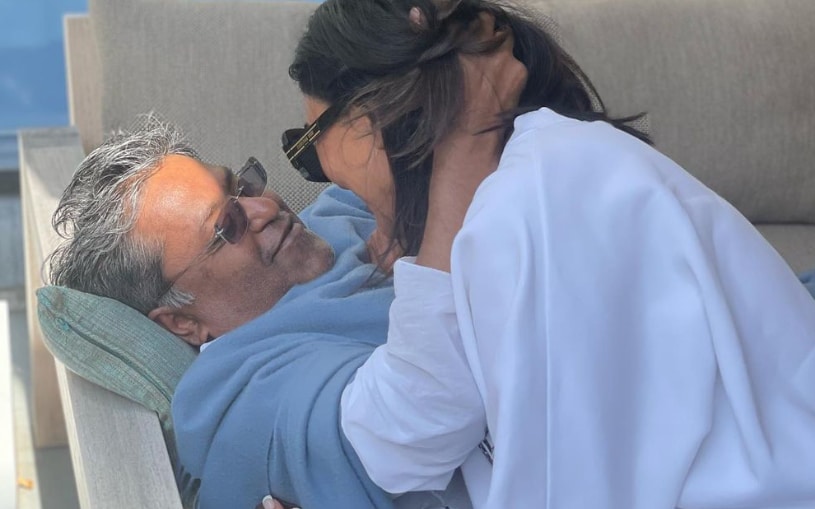 Mumbai: Looks like former Miss Universe Sushmita Sen has found love again! The 46-year-old actor is now in a relationship with businessman and former IPL Chairman Lalit Modi. Lalit Modi took to Twitter to make the announcement about them dating and called the actor as his "better half".

"Just back in London after a whirling global tour #maldives # sardinia with the families - not to mention my #betterhalf @sushmitasen47 - a new beginning a new life finally. Over the moon," he wrote on Twitter and accompanied it with a bunch of lovestruck and heart emoticons.

He also shared a carousel of pictures on his Twitter. In one of the photos, the two can be seen cosying up to each other amidst the blue waters of the ocean.

In the other one, The 'Aarya' actress and Lalit Modi are all smiles as they pose for a selfie.

The rest two are old pictures from the archives where the two are caught sharing candid moments at public events.

After Lalit tweeted pictures with Sushmita, people started speculating if the couple is now married. However, Lalit cleared the air by putting another tweet clarifying that they are just dating. He wrote, "Just for clarity. Not married - just dating each other. That too will happen one day."

Just a few months ago Sushmita announced breakup with Model Rohman Shawl. However, the two share a good bond as they have posted pictures with each other post-break-up. Rohman also joined her daughters in planning a surprise for her as she celebrated her 28th anniversary of being Miss Universe.

Sushmita also recently appeared on Twinkle Khanna's chat show where she spoke about her decision not to get married and what led to it. In the show, Sushmita said, "Luckily I met some very interesting men in my life, the only reason I never got married is that they were a letdown. It had nothing to do with my kids. My kids were never in the equation. If at all, they have been very gracious. Both my kids have accepted people in my life with open arms, and never made a face. They have given everybody an equal measure of love and respect. It's the most beautiful thing to watch".

She also revealed that she came close to getting married thrice, and all three times 'God saved' her. "I came close to getting married thrice; all three times God saved me. I can't tell you what disasters followed with their respective lives. God protected me, also because God is protecting these two kids, he can't let me get into a messy affair," she added.

Lalit Modi was married to Minal Modi who passed away four years ago after battling cancer. They had tied the knot in 1991.

Story of wanted fugitive Dr Omana Edadan, who cut her lover into pieces, ...