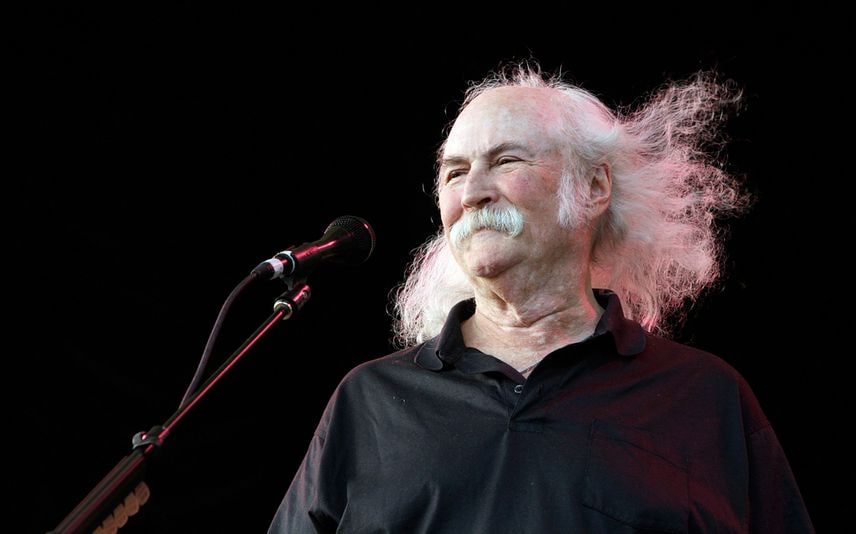 New York: David Crosby, the trailblazing singer-songwriter whose time with The Byrds and later Crosby, Stills, Nash and Young expanded rock's range, has died, his publicist said Thursday. He was 81.

Citing a family member, his publicist confirmed the death to AFP but did not provide a cause. The singer's wife Jan Dance had earlier told entertainment outlet Variety that Crosby passed following a long illness.

"Although he is no longer here with us, his humanity and kind soul will continue to guide and inspire us. His legacy will continue to live on through his legendary music," read his wife's statement.

"Peace, love, and harmony to all who knew David and those he touched. We will miss him dearly."

The two-time Rock and Roll Hall of Famer -- known as much for his alternative guitar tunings, lush harmonies and abstract lyrics as for his pacifist activism, brutal honesty and living dangerously -- remained a prolific artist throughout his life.

Over the course of six decades in the music industry, the vocalist, guitarist and composer at the forefront of countercultural rock penned a rich array of heartfelt ballads and knife-edged bangers.

Tributes quickly poured in honoring the beloved musician with a signature walrus mustache.

"I don't know what to say other than I'm heartbroken to hear about David Crosby," tweeted Brian Wilson, co-founder of the Beach Boys.

"David was an unbelievable talent -- such a great singer and songwriter. And a wonderful person."

In a statement provided to AFP via a publicist, Stephen Sills said that while he and his former bandmate had their differences over the years -- Crosby was notoriously headstrong -- "I was happy to be at peace with him."

"He was without question a giant of a musician, and his harmonic sensibilities were nothing short of genius," Stills said of Crosby. "The glue that held us together as our vocals soared, like Icarus, towards the sun."

"I am deeply saddened at his passing and shall miss him beyond measure."

Crosby first found fame as a member of The Byrds, who jumped into the public consciousness with their cover of Bob Dylan's "Mr. Tambourine Man" before delivering classic hits including "Turn! Turn! Turn!"

But the famously blunt Crosby had a number of run-ins with his bandmates and was fired in 1967.

He struck up jam sessions with Stills, the artist who first found success with Buffalo Springfield.

Graham Nash joined the pair to form a supergroup that quickly jumped onto the charts with hits including "Suite: Judy Blue Eyes" and "Our House," which Nash wrote while living with Joni Mitchell in Los Angeles' Laurel Canyon.

Neil Young eventually joined to form the best-known iteration of the group, producing some of the 1960s' top hits including "Ohio."

Crosby's sparring with both Young and Nash was well-documented, but the latter was quick to react to news of his bandmate's death, expressing "deep and profound sadness" while praising his "beautiful music" and "incredible legacy."

"I know people tend to focus on how volatile our relationship has been at times, but what has always mattered to David and me more than anything was the pure joy of the music we created together, the sound we discovered with one another, and the deep friendship we shared over all these many long years," Nash said in a statement. "David was fearless in life and in music."

"He leaves behind a tremendous void as far as sheer personality and talent in this world."

For decades Crosby struggled with drug addiction and myriad health problems, but eventually got clean and got a liver transplant -- keeping only his penchant for weed.

He found a creative renaissance working with younger artists, including his son James.

"Normally, as you get older, you sort of peter out. You write less," he told AFP during an interview in 2021.

But writing with peers "extended my life as a writer tremendously," he said. "I just love making music."

Jason Isbell, who the artist collaborated with in his final decade, also voiced his sadness: "Grateful for the time we had with David Crosby. We'll miss him a lot."

Crosby also helped Melissa Etheridge, the rocker who found fame in the 1990s, and her partner conceive their children via sperm donation.

"He gave me the gift of family," Etheridge tweeted upon news of Crosby's death. "His music and legacy will inspire many generations to come. A true treasure."

In his twilight years Crosby became an avid tweeter, delighting fans with frenetic, often humorous missives, including reviews of their joints.

On his last day active on the platform, January 18, Crosby responded to one user's tweet sorting out who's allowed into heaven.

"I heard the place is overrated....cloudy," Crosby quipped.