Dulquer Salmaan issues apology after woman accuses him of body-shaming 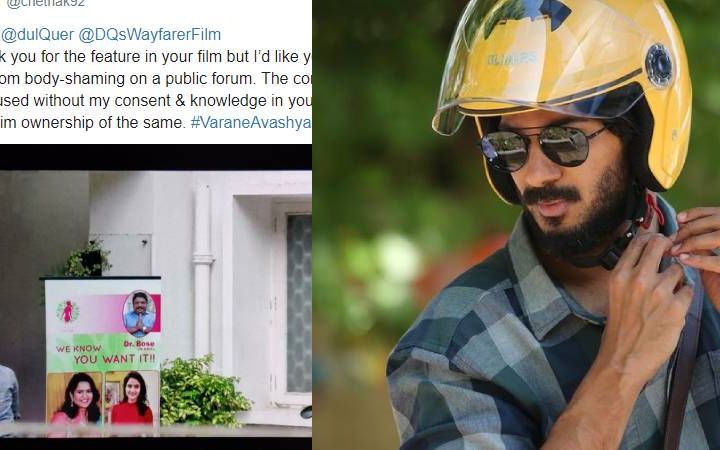 Mollywood actor Dulquer Salmaan apologized to a Mumbai-based lady journalist after she accused him of body-shaming in his movie ‘Varane Avashyamund’. The woman took to her twitter and accused him of using her pics in the movie without seeking her consent. She also shared a clip from the movie which features her in the hoarding of a fitness centre.

After noticing her tweet, Dulquer Salmaan apologized to her for using her pic without seeking her permission.

The woman has come up with the complaint after the movie got uploaded on an online platform.

“Thank you for the feature in your film but I’d like you to excuse me from body-shaming on a public forum. The concerned image was used without my consent & knowledge in your film. I’d like to claim ownership of the same,” tweeted the journalist.

‘Varane Avashyamund’ was the first venture of Dulquer’s production company Wayfarer Films. Being the producer and lead actor, Dulquer responded to her complaint immediately on twitter.

“We take full responsibility for the error on our behalf. Will look into it with concerned departments of the film to understand how the images were sourced. I apologise from my end and from the film as well as @DQsWayfarerFilm for any difficulties caused. It wasnt intentional,” tweeted Dulquer Salmaan as a reply to her.

The woman also demanded Netflix India which streams the movie online to delete the scenes with her pictures or blur the images.

Anoop Sathyan, director of ‘Varane Avashyamund’ also apologised to the woman through twitter.

He pointed out that his team has no intention to disrespect or objectify woman as the content of the film is in itself against sexism.