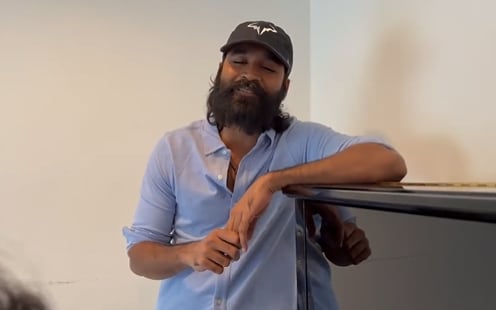 Dhanush, who plays the lead in Venky Atluri's upcoming bilingual film, 'Vaathi', has put out a video clip in which he is seen singing a few lines from the first single of the film which is to be released on November 10.

The video, which is almost a minute and a half long, has music director G. V. Prakash playing the piano and Dhanush singing along. Needless to say, the video clip has caught the attention of fans.

The original song has been sung by singer Shweta Mohan, who Dhanush has disclosed is his favourite.

Posting the video clip on his timeline on social media, Dhanush wrote: "'Vaathi'/'Sir' first single 'Vaa Vaathi'(Tamil)/ Masteru (Telugu) from 10th. G. V. Prakash musical and my favourite Shweta Mohan has sung it. Hope you guys like it."

Written and directed by Venky Atluri, the film features Samyuktha Menon as the female lead and is scheduled to hit screens on December 2 this year.

The film is about making quality education accessible to the poor. Actor Dhanush plays Bala Gangadhar Tilak, a junior lecturer in Tripathi Educational Institute in the film.

Dhanush delivers a punch line in the film, which many believe to be the bottomline of 'Vaathi'. He says: "Education is equal to the offering we place before God in a temple. Distribute it. Don't sell it like a dish from a five-star hotel."