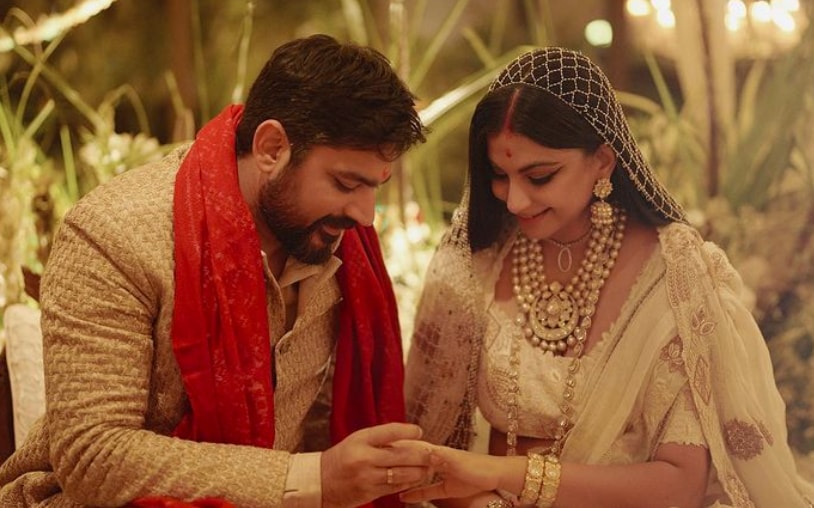 Mumbai: Producer Rhea Kapoor, who recently tied the knot with her long-time boyfriend Karan Boolani, has penned a heartfelt note about starting a new chapter of her life.

"12 years later, I shouldn't have been nervous or overwhelmed because you're my best friend and the best guy ever. But I cried and shook and had stomach flips all the way through because I didn't know how humbling the experience would be. I'll always be that girl who had to come home to Juhu at 11 pm before my parents fell asleep. Only until now I didn't know how lucky I was to feel torn. I hope we make a family so close that we have many, many loves of our life," she wrote on Instagram.

Rhea also mentioned the "loves" of her life.

Alongside the post, Rhea treated her fans with a picture from her wedding festivities. In the image, Rhea and Karan can be seen exchanging rings. Rhea chose to wear an off-white ethnic outfit adorned with beautiful golden work. On the other hand, Karan sported golden coloured sherwani.

"Woahh... you look so beautiful," a fan commented.

"God bless you both," another one wrote.

Rhea, the second child of veteran actor Anil Kapoor and Sunita Kapoor, has produced movies like 'Aisha', 'Khoobsurat', and 'Veere Di Wedding'. She is also a fashion stylist.