After recently sharing a photograph of Alia catching up on sleep with her cat, Shaheen has now shared a cute picture of the actress where the two sisters strike a casual pose. 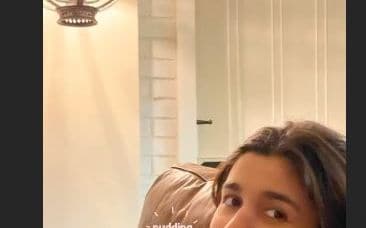 ​Mumbai: A new picture of Alia Bhatt has the actress in a no-makeup look, and fans cannot help gushing. The photograph was uploaded by her sister Shaheen Bhatt. After recently sharing a photograph of Alia catching up on sleep with her cat, Shaheen has now shared a cute picture of the actress where the two sisters strike a casual pose.

In the picture, Alia looks stunning in a white top with colourful print. What grabs the eyeballs, besides her trademark sweet smile, is Alia's glowing skin without any make-up.

Meanwhile, during the lockdown period, the sisters have been experimenting in the kitchen. Recently, Alia's sister Shaheen took to her Instagram to share a photograph of the actress in her pajamas.

In the monochrome image, the actress, who looked pretty in a casual t-shirt and pajamas, is flashing a big smile for the camera as she is standing in her kitchen. In the caption, Shaheen said that Alia was making a pudding.

Meanwhile, on the film front, Alia will be seen in Ayan Mukerji's "Brahmastra", which also stars Amitabh Bachchan and Ranbir Kapoor, and "Sadak 2".