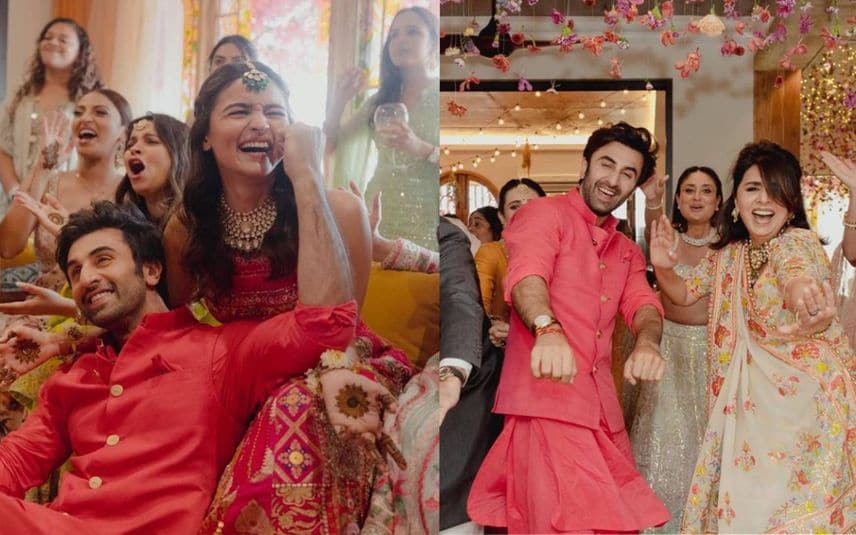 Mumbai: Bollywood's newest bride Alia Bhatt on Saturday treated fans to glimpses of her mehendi ceremony from her intimate wedding with Ranbir Kapoor.

Taking to her Instagram handle, Alia shared several pictures, which proved that the mehendi ceremony was a fun-filled tale with dance performances and tons of smiles from every corner.

For the occasion, both the bride and groom had opted for reddish-pink coloured attires. While Alia looked elegant in her beautiful lehenga, Ranbir too exuded charm in his kurta and Nehru jacket.

In the first picture, which was a monochrome one, Alia and Ranbir could be seen looking deep into each other's eyes while in an embrace.

The second one was a picture of Alia surrounded by her girl squad which included her friends Akansha Ranjan Kapoor and Anushka Ranjan.

Further, the snap showed Ranbir making his late father Rishi Kapoor a part of the mehendi ceremony by holding his photo in his hand while dancing.

In the fourth image, Alia, her sister Shaheen Bhatt and friend-filmmaker Ayan Mukerji could be seen hugging each other adorably while posing for the camera.

Next was an image of Ranbir sitting in Alia's lap while cutely pulling her cheeks. They were surrounded by guests invited to the mehendi ceremony.

Another picture had the groom squad, including mother Neetu Kapoor, sister Riddhima Kapoor Sahni and cousins Karisma and Kareena Kapoor putting up a surprise performance.

The seventh snap featured Alia smiling while looking at Ranbir's mehendi-adorned hand. It had her name written on it inside a heart.

Finally, the last click was again a monochrome shot of Alia giving Ranbir a tight hug.

Along with the images, in the caption, Alia penned a heartfelt note revealing some of the highlights from her pre-wedding festivities.

She wrote, "The Mehendi was like something out of a dream. It was a day full of love, family, our beautiful best friends, a LOT of French fries, a surprise performance by the ladkewalas, Ayan playing DJ, a BIG surprise organised by Mr. Kapoor (my favourite artist performed my favourite songs), all followed by some happy tears and quiet, blissful moments with the love of my life. There are days... and then there are days like these!"

Ranbir and Alia tied the knot in an intimate wedding ceremony held at the former's Bandra house Vastu, on Thursday. The duo took pheras in the presence of their closest friends and family members.

Minutes before appearing in front of the media, Alia shared her official wedding pictures on her Instagram handle.

The couple had fallen in love with each other on the sets of their upcoming film 'Brahmastra'. They made their first appearance as a couple at Sonam Kapoor's wedding reception in 2018. (ANI)