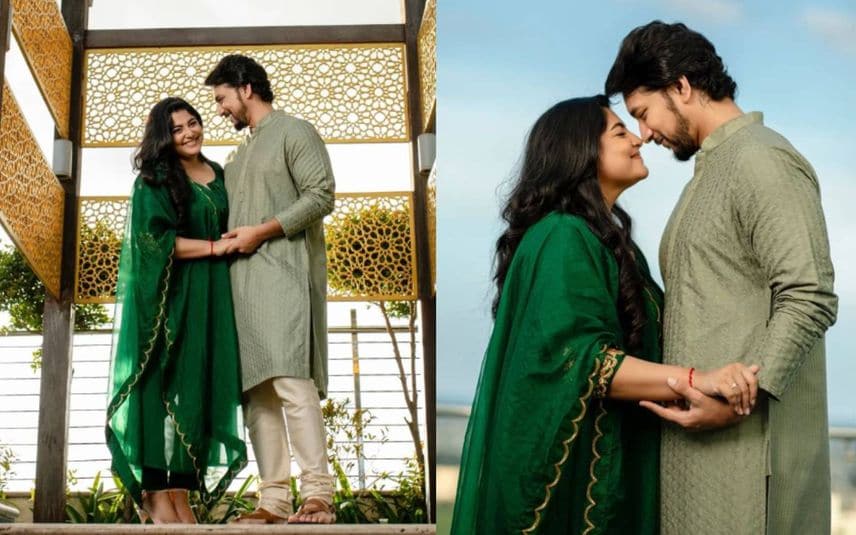 South stars Manjima Mohan and Gautham Karthik will enter wedlock on November 28 in Chennai. According to reports, only relatives and close friends are invited to the function.

Ahead of their wedding, the couple shared some pics from their pre-wedding festivities on Friday. In the pics, the lovebirds were seen twinning in green outfits.

On October 31, the couple announced their engagement by sharing some romantic pics on Instagram. According to reports, they were in a relationship for about two years now.

The duo fell in love after sharing screen space in ‘Devarattam’ which was released in 2019.

Manjima who entered the film industry as a child artiste in Malayalam movies has been working in Tamil and Telugu movies. She made her acting debut as a heroine in the Malayalam film ‘Oru Vadakkan Selfie’ in 2015. She was last seen in Tamil films ‘FIR’ and ‘Tughlaq Durbar’.

Gautham is the son of veteran Tamil actor Karthik. He made his acting debut with Mani Ratnam’s ‘Kadal’ in 2013. ‘Anandham Vilayadum Veedu’ and ‘Yutha Satham’ are his last released films.