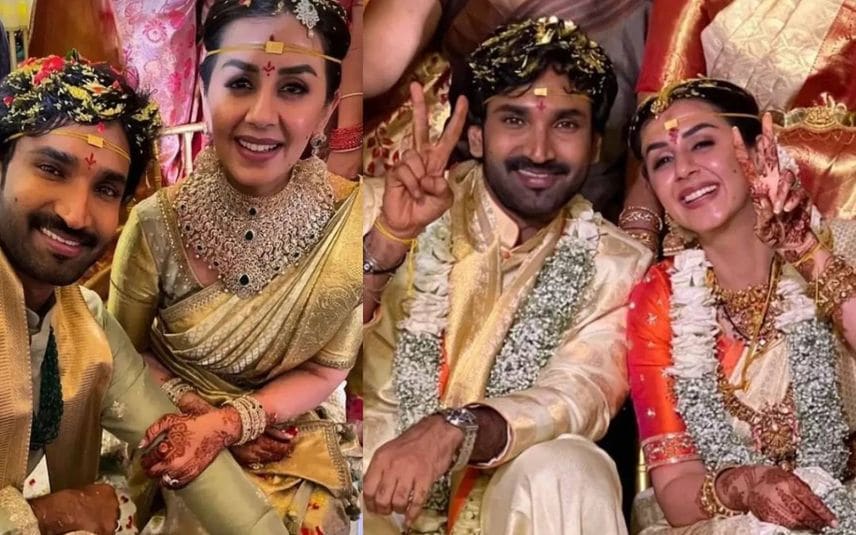 Aadhi and Nikki at their wedding. Photo: Social media

South stars Nikki Galrani and Aadhi Pinisetty officially entered the wedlock on Wednesday. Photos and videos of their grand wedding have been trending on social media.

Only close relatives and friends were invited to the wedding held in Chennai.

Aadhi Pinisetty and Nikki Galrani have been together for quite some time. After collaborating in films such as 'Maragatha Naanayam' and 'Yagavarayinum Naa Kaakka', the couple fell for each other, after which they decided to tie the knot.

Nikki Galrani made her acting debut with Nivin Pauly starrer '1983'. She acted in a number of Malayalam movies including 'Om Shanti Oshaana', 'Vellimoonga' and 'Dhamaka'.

She was last seen in Tamil movie 'Idiot'.

Aadhi is a popular face in Tamil and Telugu movies. ‘Mirugam’, ‘Eeram’, ‘U Turn’, ‘Clap’ are some of his popular films.

Nikki Galrani, Aadhi to enter wedlock on May 18: Reports

South stars Nikki Galrani and Aadhi Pinisetty officially entered the wedlock on Wednesday. Photos and videos of their grand wedding have been trending ..

Mumbai: Kamal Haasan is the first Indian actor to lay the foundation for his Metaverse debut on VistaVerse. VistaVerse is hosting its inaugural metaverse ..

Pooja Hegde, who made her Cannes Film Festival debut at the 'Top Gun: Maverick' premiere on Wednesday, was a sight to behold in an elaborate strapless ..

Kochi: The time sought by actor-producer Vijay Babu, who is accused of sexual abuse by a former colleague, to appear before the police for questioning ..