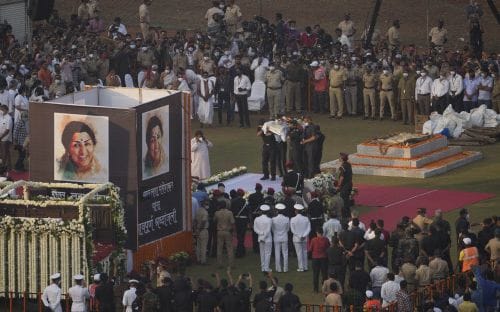 Mumbai: Singing legend Lata Mangeshkar, who enthralled millions with her divine voice for eight decades, was cremated with full state honours in Mumbai on Sunday.

Prime Minister Narendra Modi was among the luminaries from politics and entertainment industry present at her funeral at Shivaji Park in Dadar area in the evening.

Modi left the venue after offering her floral tributes. Floral tributes were also paid to her at Shivaji Park on behalf of President Ram Nath Kovind.

Lata's brother Hridaynath Mangeshkar lit the funeral pyre of the singing legend, who died at 92 in a hospital here on Sunday morning after multi-organ failure.

The mortal remains of Lata Mangeshkar, draped in the national flag, were taken in a truck from her residence in south Mumbai to Shivaji Park for the last rites.

A large number of people thronged the roads from where the cortege passed as the melody queen embarked on her final journey.