From loving non-veg food to being an avid cricket watcher, here are a few fun facts about Lataji 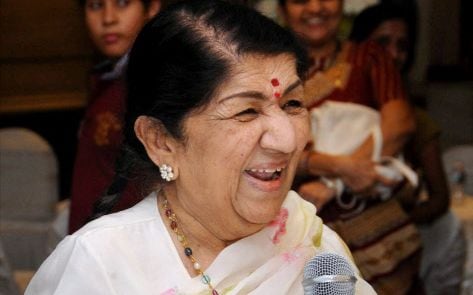 Mumbai: 'Nightingale' and 'Queen of melody' are some of the titles used to describe Lata Mangeshkar, but there are some aspects of her life that might have evaded the public eye.

All thanks to actor Tuhinaa Vohra for sharing a few interesting details that one might not know about Lata Mangeshkar.

Taking to Instagram, Tuhinaa penned a lengthy post revealing that her grandfather and late music director Anil Biswas had mentored Lata Mangeshkar. He had taught her how not to break up words while singing.

"This is a picture of my grandfather, composer Anil Biswas, and the legendary Indian singer Lata Mangeshkar. He was famously her mentor who taught her breath control and how not to break up words or phrases in songs," she wrote.

Tuhinaa also shared that Lata Mangeshkar was fond of non-vegetarian food and her grandfather used to even cook it for her sometimes.

"The second picture is a glimpse into a more personal space. In her struggling days, she would walk all the way from Tardeo to Dadar to my grandfather's house to practice music with him. Knowing she was fond of food, especially non-veg, and knowing she could not afford it then, he would cook it for her and they would eat and sing together," she posted, adding a picture, in which Lata Mangeshkar can be seen sitting next to Anil Biswas while he was busy cooking.

Sharing a few more anecdotes, Tuhinaa wrote, "Once, they were out somewhere and a piece of music came to him. He asked her to mentally note down the two lines of Saraswati Vandana that he had just composed. That piece of music was never completed nor ever recorded. However, 60 years later, when my mother met her, she remarked that she had last seen my mum in a little blue frock, and then belted out those two lines randomly relayed to her six decades ago. An ode to her remarkable memory, but also her fondness for my granddad."

She added, "Anil Biswas said that once Lata Mangeshkar entered the world of Hindi cinema, music directors became fearless about composing, because no matter how tough the composition, she could sing it."

Tuhinaa also recalled how Lata Mangeshkar threatened the state government that she would have no option but to leave Mumbai and settle down at her Pune residence or the ancestral home in Kolhapur if the government went ahead with the construction of flyover near her residence.

"Bombayites will miss the grand old dame, who was allowed to complain that if they tried to build a flyover next to her house, it would disturb her riyaaz, and if there was insistence on constructing it, to threaten that she would move out of this city," she posted.

While replying to one of the netizens, Tuhinaa stated that Lata Mangeshkar was "a keen photographer" and was "immensely fond of cricket."

Lata Mangeshkar, who died on Sunday morning, leaves behind a legacy of iconic songs and a bundle of inspiration for people across generations. Rest in peace, Nightingale.