Chennai : The South Indian movie music world shared the grief of noted playback singer K.S. Chitra, who lost her eight-year-old daughter in a swimming pool accident in Dubai Thursday. 'The family came back from Dubai this (Friday) morning and the funeral was held in the evening,' Chitra's manager...

'The family came back from Dubai this (Friday) morning and the funeral was held in the evening,' Chitra's manager Krishna Kutty Menon told IANS. 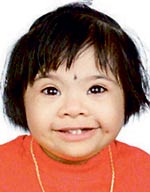 A person in Chitra's household told IANS that the entire household was in tears.

Chitra had been to Dubai alongwith her family to perform in A.R. Rahman's music show and was staying in a villa there when the accident happened.

Nadana, a differently-abled child, fell into the pool while playing.

She was born to Chitra and Vijayashankar in 2002, 15 years after their marriage.

A devotee of Hindu god Krishna, Chitra had named her daughter after she got an award from the Kerala government for her song in the Malayalam movie 'Nandanam'.

'It is very sad to hear. Chitra is such a humble person. Despite winning several awards and being a celebrity she does not have any airs,' a media professional told IANS.

Mohanlal's biography to be released on his next birthday

'We all await Lalettan's birthday'; actress Lissy writes on behalf of 80s

Rishi - You have locked up yourself and lost the keys too...

‘I have tricked people into doing things’, says actor Innocent
News in Videos