Clad in a red sari and flaunting diamonds and emeralds, actress Shilpa Shetty on Sunday exchanged wedding vows with London-based businessman Raj Kundra in a close-knit family affair in Khandala in this Maharashtra hill station. 'Everything went very well. All parents want their children to get married...

Clad in a red sari and flaunting diamonds and emeralds, actress Shilpa Shetty on Sunday exchanged wedding vows with London-based businessman Raj Kundra in a close-knit family affair in Khandala in this Maharashtra hill station. 'Everything went very well. All parents want their children to get married happily and that goes the same for Shilpa's parents as well. They are very happy,' said Kiran Bawa, Shilpa's friend and business partner, after the wedding. 'Raj and Shilpa both were very nervous before the marriage but now they are happy. We are going straight to Raj's house in Mumbai,' she added. 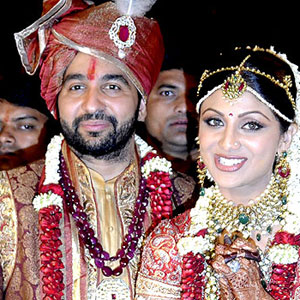 Wearing a red sari designed by Tarun Tahiliani, the 34-year-old exchanged vows with Kundra as per the Bunt tradition, according to the Mangalorean community that the Shettys belong to. The groom was sporting a maroon sherwani with golden embroidery and a turban with his face veiled by a sehra (string of pearls). He was also holding a sword in his hand, as per Indian tradition. Kundra left Amrit Villa, located about five minutes away from Bawa Villa, where the wedding was held, in a two-horse chariot. Photographers scrambled to train their cameras at the goings-on while curious star-gazers were kept at bay by both private and police security. Sunday's wedding was the climax of the two-day festivities that included a sangeet ceremony Saturday night here. The buzz around the marriage started early this year and had been steadily getting louder even though Shilpa denied it officially before getting engaged to Kundra late October. Expected at the marriage were celebrities like the Bachchan family, Shah Rukh Khan and family, the Kapoors, Rekha, Farah Khan, Salman Khan, Farhan Akhtar, Karan Johar, the Deols and Sushmita Sen. However, noticed prominently on the occasion were only actors Rohit Roy, Jackky Bhagnani and Tahiliani. Shilpa also delighted fans by posting a blog entry titled 'This is it' on her D-day. 'Thanks for all the best wishes from family and friends...Will write to you very soon... As Shilpa Shetty Kundra. This is it,' she posted on www.shilpashettylive.com/blog on Sunday morning. Shilpa met Raj after her win on the British reality show 'Big Brother' in 2007. Shilpa's sister, actress Shamita who was participating in the third edition of 'Bigg Boss', withdrew voluntarily from the show to attend the wedding.

Writing my memoir was both cathartic and revelatory: Kabir Bedi