Working in this production gives me immense pleasure, maybe more than working in a Mani Ratnam movie. 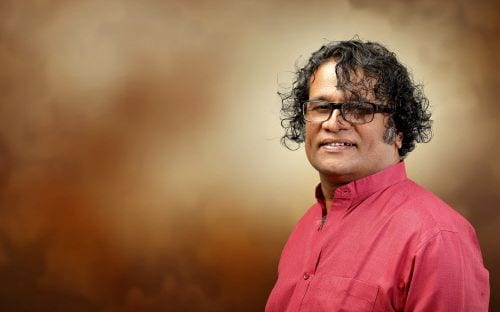 Hareesh Peradi is one such actor who ensures his best screen presence and puts his signature in every character he does. Even though the actor made his debut through Malayalam movies, he is now busy with a handful of good Tamil movies as well as Malayalam and is stepping into other South-Indian film industries. Amidst these tight schedules, the actor has surprised his audience by returning to theatre plays, from where he started his acting career.

‘Priyapetta Avivahithan’ is a politically acclaimed work of legendary theatre activist PM Taj. Director A Ratnakaran has skillfully linked the voices of 5 actors and presented his audio drama in the 31st annual commemoration of Taj virtually. Malayalam actors Joy Mathew, Sudheesh, Devi Raghavan and Sreeja Chelannur have performed in this play along with Hareesh Peradi.

How are you looking at this ‘come back’ to the theatre when a handful of big movies are on the immediate list?

Theatre made me an actor. I started my stage career in school. Even if decades pass on, theatre always welcomes me. The love and support from theatre enthusiasts always leave me grateful. But the film field is like a ‘fully-equipped ready-to-go vehicle’. If we miss it, there is no comeback. So we have to be ready and jump on as and when the vehicle reaches us. But theatre is different from it.

Is your new play ‘Priyapetta Avivahithan’ a tribute to PM Taj?

Obviously. Working in this production gives me immense pleasure, maybe more than working in a Mani Ratnam movie. Taj is still a great inspiration to me. But unfortunately, I could not work with Taj and his team. Taj and his plays always attracted young drama enthusiasts in the Malabar region. I have read all of his works and have done his plays for other directors.

When I was schooling at Zamorins School in Kozhikode, I never used to miss any plays staged in the Town Hall or any other spots.

I am really delighted to work in ‘Priyapetta Avivahithan’ which is directed by A Ratnakaran, one of the senior theatre activists of Kerala. He is my mentor in theatre as well. I gave my voice for ‘Priyapetta Avivahithan’ from Chennai. Joyettan (Joy Mathew) and Sudheesh from Kochi. The other two artists performed from Abu Dhabi and Kozhikode. He utilised the possibilities of the latest technology. So, it was easy for us to do it.

Do you feel a gap in theatre after you leave for movies?

Never. There is nothing like ‘leaving the theatre’ for me. It is true that I have not appeared on stage since 2007 but you ask me which play I haven’t watched. I have not missed any plays staged here. That’s what I said, theatre always welcomes me. I have travelled several times from Thiruvananthapuram and Chennai amidst my shootings to watch my friends’ plays.

If you get a chance to be a superstar in South Indian Movies on one hand and on the other to be a successful and humble thespian, which one would you choose?

Why can’t I choose both? I’ll prefer both because both give extremely different experiences. The satisfaction and impact on live stages and getting success for a movie which you have been working hard for months are both overwhelming. Both give two types of happiness and satisfaction.

Theatre acting has helped me a lot in my career. Theatre experiences are different every time. Appunnikal is one of my long staged plays. We have performed it on more than 1000 stages. Every time I do it, I get a new experience. The audience gives immediate responses. The actor in me changes automatically.

Whereas movie acting is like dead acting. We have to perform between ‘Action and cuts’. But when the technicians combine that dead acting into a live one, the actor inside us intensifies.

Since there is no theatre release currently, I am not sure about releases. But there are a few getting ready for the OTT release. Some are in post-production works. ‘Marakkar: Arabikadalinte Simham’ will be my upcoming Malayalam movie.