Kongara said her journey of six-eight months making the film with people from the community, opened her eyes to a world she was unaware of. 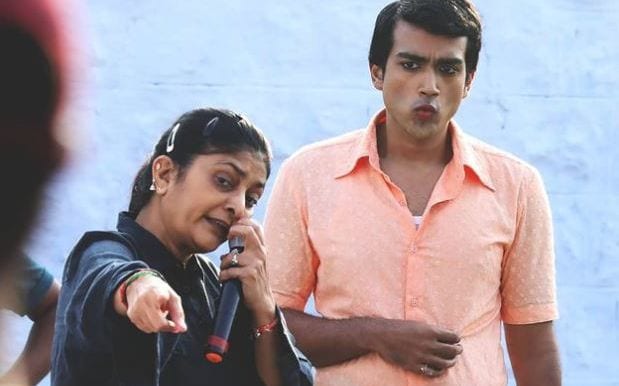 Sudha Kongara with Kalidas Jayaram at the set of 'Paava Kadhaigal' | Photo: Instagram|kalidas_jayaram|

Cinema has often painted a stereotypical representation of transgender people, says filmmaker Sudha Kongara, who believes it is important that the community which is often subjected to "systemic violence" finds an authentic portrayal on screen.

In her latest short for Netflix Tamil anthology "Paava Kadhaigal", Kongara places a transgender person in the centre of a conflict to chronicle the story of guilt, shame, acceptance and love.

In an interview with PTI over Zoom, the director said through the short 'Thangam', she came closer to understanding the community.

"Cinema should represent them as they are. Represent reactions to them as they are, give solution if you can. These are the only ways you can change the perception about a transgender. I've had stereotypical representations and studies of transgenders affect me.

"I've been scared of transgenders. I've not been open to their emotions, open to what they are and how they are till I did this film," she said.

Kongara said her journey of six-eight months making the film with people from the community, opened her eyes to a world she was unaware of.

The "Saala Khadoos" director said she had 10-15 transgender people on set, who she would consult and turn to for advice.

"They were there to help me make this film. To tell me to represent them correctly. 'Please don't a mockery of us.' I've tried to be as true as I can to their feelings and at every stage involved them, consciously.

"I've asked for their approval, it meant the world to me. To me, the film doesn't matter to me as much as them approving my film and saying that I have said what they have felt. I take that as my greatest compliment," she added.

Predominantly a love story, 'Thangam' aims to put spotlight on transphobia and narrates the horrors a transgender person goes through to find acceptance.

Kongara, 48, said she is pained that there isn't any significant change in the way the community is treated in the society even today.

"I see systemic violence against them -- physical, mental and psychological. It is the worst kind of violence that anyone can inflict on another human, that's what the society is doing on them."

The film features Jayaram as Sathaar, a transgender secretly in love with his childhood best friend Saravanan (Bhagyaraj).

The director said she initially wanted to cast a transgender person for the role but was strapped for time as she was juggling both, "Thangam" and her feature film "Soorarai Pottru", the Suriya-starrer which released last month on Amazon Prime Video.

"My deadline for both was March 31, 2020. We were going hammer and tongs to find a trans person to play the role. I just didn't get a person," she said.

Kongara had approached two actors to play Sathaar, but even that didn't work out. One wasn't comfortable playing a transgender person while the other was busy shooting a film, she said.

She then approached Jayaram "reluctantly" as the actor had gone to America with no intention of continuing to act.

But when he heard the script, Jayaram was eager to be part of the short.

"This required at least three months to get into the character but I didn't have anyone else. But he was really affected with the part and wanted to play it. We had transgenders on set, they interacted with Kalidas, he spent several days talking to them about their lives, livelihood, and problems.

"He understood what makes them react the way they do and brought those reactions out. When he came on set, people were astounded by his transformation. It wasn't easy... For most part, Kali became like a trans person to be able to feel, which is why he wasn't hitting any false note," she added.

"Paava Kadhaigal" is scheduled to be released on Friday.