Manu Ashokan treats audience with an emotional subject in 'Kaanekkaane'

In ‘Kaanekkaane’ the hero becomes a villain and vice versa. So, more than the definitions given for good, bad, positive, negative etc, the catch for me was the element of ‘human errors’ which are possible to happen for any human being. It has not been widely discussed yet. 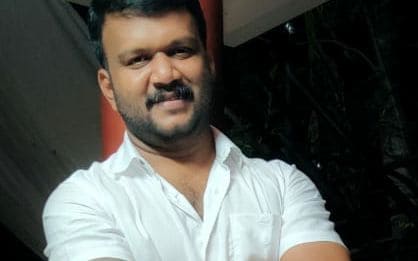 Breaking the stereotypes of black and white, positive and negative in life, ‘Kaanekkaane’, a movie by Manu Ashokan, the hitmaker and director of Uyare, speaks about the success of the movie on the occasion of completing one week of its release on OTT platform. Kaanekkaane is penned by Bobby-Sanjay duo who also penned for Uyare. Manu Ashokan talks exclusively to Mathrubhumi.com.

How is the responses from audience?

I think the emotional connection has been successfully received. Because every phone call and social media response I receive, everyone expresses about that human-human relationship and the complicated emotions. We have chosen such a human-emotion-conveying story intentionally to be discussed and believe it has been successfully delivered to the audience in its complete form.

Do you find any difference in the kind of response received because your first film ‘Uyare’ was a theatre release and ‘Kaanekkaane’ a OTT release?

The main difference is the theatre experience. Sitting with a heterogeneous audience and watching the movie is a totally special and learning experience. Whereas the OTT gives a wider response as the movie is released to the whole world at the same time. Both of them are different satisfying experiences.

For ‘Uyare’, I started getting good responses by the second screening. But the responses for ‘Kaanekkaane’ are mixed. Sometimes, a lot of phone calls and voice messages flood my inbox; only a few will be there. It is because people can watch the movie at any time as they wish, no particular schedule is there as in theatre.

What is the 'success mantra' of the Bobby-Sanjay and Manu Ashokan combo?

Nothing but content. Content is the king. The audience has changed. They know whether they are being treated well or cheated. We were particular about being genuine to the audience and have succeeded in it.

Along with that, cinema has a grammar and we need to give those ingredients which are highly recommended for it. But the ‘catch’ of any film will be its content. First of all, we have to like the story, interpret the commercial ability and how the audience perceives it. It is subjective and unpredictable but should have an idea about it.

When Bobby and Sanjay told me this story, I was convinced. The excitement we receive while hearing the crux of the story is what we develop into a movie and that’s the only magic.

How did you manage the ratio of evil and good as well as the political correctness in the movie?

More than the political aspect of the story, I was excited about the human emotional conflict or the emotional rollercoaster element in it. A human being generally has both sides, good and bad. In ‘Kaanekkaane’ the hero becomes a villain and vice versa. So, more than the definitions given for good, bad, positive, negative etc, the catch for me was the element of ‘human errors’ which are possible to happen for any human being. It has not been widely discussed yet. I wanted to break the cliche of the hero being positive and the villain being evil.

Was that political balancing a challenge while making?

Never. We were quite confident about the content. Of course, how the audience will digest was a question but it was never pressure or confusion. We had clarity on the content and its political side.

How were the casting procedures?

The story was first presented to Tovino Thomas, who is a very good friend of mine during the shoot of ‘Uyare’ and he was quite convinced about the content and character. Then we approached Suraj Venjaramood, followed by Aiswarya Lakshmi and Sruthi Ramachandran. All of them were excited and willing to accept the project. Hence, they were the first and sure cast of the movie. Slowly, we approached the remaining actors.

What were the preparations that actors had taken for the movie?

Tovino Thomas was already on a make-over during the pandemic and lockdown period which has enhanced our character, Allen, who was undergoing a deep trauma and stress. That physical change was a boon. Other issues that were going parallelly and had affected our movie shoot was the date clashes of the actors, Tovino’s accident during another movie shoot etc. But those are physical.

Understanding the dimensions of the characters, reflecting the character’s feelings, performing out what the director wanted etc are the true processes in the case of an actor. That was marvellously done by the four main characters of our movie.

Were the subtle and brief expressions of the characters overruling dialogues at intricate scenes purposeful?

Absolutely. I had a clear idea of what and how all the characters should perform. I had communicated it properly with them. I have not let the actors go beyond or below my expectations. They had easily safe-landed in my expectations. It was deliberate and properly executed. Since all of them are exquisite actors, it was not a tough task to do for me and them.

What are the new projects?

New projects are in the infant stage. But I can say that it will definitely be with the Bobby-Sanjay duo only. We travel a lot and discuss stories while travelling. Some threads are in progress but cannot be announced now.

How was the film industry especially those non-glamorous technicians’ life during the pandemic and lockdown? Did it adversely affect the industry?

Obviously. Everyone was adversely affected. After ‘Uyare’ our crew was planning to do another movie but it was a big one so we had to drop the plan. More than movies or art, it was the time of ‘survival’. Film workers or theatre persons or any human being, everyone was thinking about survival. Now slowly everything is resuming.