A woman in Sweden has given birth to a baby boy using a transplanted womb, in a medical first, doctors report. The 36-year-old mother, who was born without a uterus, received a donated womb from a friend in her 60s. The British medical journal The Lancet says the baby was born prematurely... 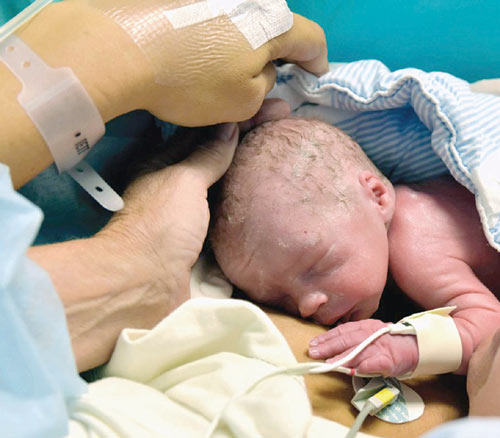 A woman in Sweden has given birth to a baby boy using a transplanted womb, in a medical first, doctors report.

The 36-year-old mother, who was born without a uterus, received a donated womb from a friend in her 60s.

The British medical journal The Lancet says the baby was born prematurely in September weighing 1.8kg (3.9lb). The father said his son was 'amazing'.

Cancer treatment and birth defects are the main reasons women can be left without a functioning womb.

If they want a child of their own, their only option is surrogacy.

The identity of the couple in Sweden has not been released, but it is known the mother still had functioning ovaries.

The couple went through IVF to produce 11 embryos, which were frozen. Doctors at the University of Gothenburg then performed the womb transplant.

The donor was a 61-year-old family friend who had gone through the menopause seven years earlier.

Drugs to suppress the immune system were needed to prevent the womb being rejected.

A year after the transplant, doctors decided they were ready to implant one of the frozen embryos and a pregnancy ensued.

The baby was born prematurely, almost 32 weeks into the pregnancy, after the mother developed pre-eclampsia and the baby's heart rate became abnormal.

Both baby and mum are now said to be doing well.

In an anonymous interview with the AP news agency, the father said: 'It was a pretty tough journey over the years, but we now have the most amazing baby.

'He's no different from any other child, but he will have a good story to tell.''

In one case, the organ became diseased and had to be removed after three months. Another case resulted in miscarriages.

Prof Mats Brannstrom, who led the transplant team, described the birth in Sweden as a joyous moment.

'That was a fantastic happiness for me and the whole team, but it was an unreal sensation also because we really could not believe we had reached this moment.

'Our success is based on more than 10 years of intensive animal research and surgical training by our team and opens up the possibility of treating many young females worldwide that suffer from uterine infertility.'

However, there are still doubts about the safety and effectiveness of the invasive procedure.

Dr Brannstrom and his team are working with another eight couples with a similar need. The results of those pregnancy attempts will give a better picture of whether this technique can be used more widely.

Dr Allan Pacey, the chairman of the British Fertility Society, told the BBC News website: 'I think it is brilliant and revolutionary and opens the door to many infertile women.

'The scale of it feels a bit like IVF. It feels like a step change. The question is can it be done repeatedly, reliably and safely.'

The couple, fresh from celebrating the birth of their child, will soon have to decide if they want a second.

The drugs used to prevent the womb being rejected would be damaging in the long term - so the couple will either try again or have the womb removed.
Share on

News |
No case of new 'Omicron' variant of coronavirus detected in India yet: Official

Don't eat too much potato chips during pregnancy