Without tourists, some Barcelona hotels get creative to survive offering long-term stays 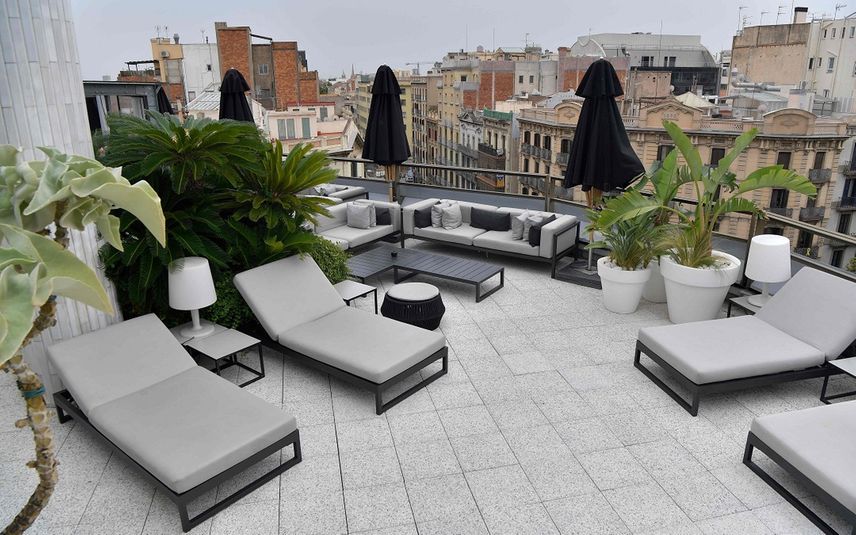 A picture shows the rooftop of the Hotel Claris that has reinvented itself and adapted its premises to suit those working remotely and dropped the price for long-term stays in order to compete with the traditional rental market. Photo | AFP

Barcelona: Sergi Pino recently moved to Barcelona, but rather than renting a flat, he's staying at a hotel which has been forced to get creative to compensate for the absence of tourists.

Hugely popular with international visitors, the city has seen most of its hotels close as the pandemic has kept tourists away, and the few that remain open have had to repurpose themselves to stay afloat.

Some have adapted their premises to suit telecommuters, while others have dropped the price for long-term stays in order to compete with the traditional rental market.

Still others are offering a deluxe experience to residents who, unable to travel, get to play the tourist in their own city.

At his new "home" in the Gallery Hotel, Pino not only has his room, but enjoys the use of the gym, the pool, the spa and an open space for teleworking all for 900 euros ($1,080) a month.

"There's more space, I'm happy and focused on my work," he says, sitting in front of a screen in the shared working space wearing a grey suit and white trainers. "Nothing bothers me."

A former basketball player who is two metres (six foot, five inches) tall, Pino used to commute from his home 70 kilometres (43 miles) away.

But when he looked for a flat, he realised that staying in a hotel would be more affordable.

And he's not alone: among other long-term "guests" at the hotel are couples whose homes are being renovated and people who were going to move abroad but found their relocation put on hold because of the pandemic.

"We have eight people living with us and we're about to take in another 24 reservations," says Marta Golobardes, director general of the Gallery group, which includes hotels in the southern resort of Malaga and Mallorca in the Balearic Isles.

Shuttered by the pandemic in March, the hotel reopened in October after being refitted for distance working with shared working spaces and rooms converted into offices with a desk instead of a bed for those who cannot concentrate at home.

Although they are making just a fraction of what they would have done in a normal year, the income goes some way to compensating for the losses incurred by the pandemic, "providing the staff with jobs, and meaning less money lost", Golobardes says.

Several hotels have taken a similar approach, offering rooms for as little as 600 euros ($730) a month, which is cheaper than renting a studio in Barcelona.

Others are offering a taste of luxury, with one hotel, the Ohla, promising a free overnight stay for those paying to have dinner in its Michelin-starred restaurant.

The pandemic has caused "tragedy" in a city that last year welcomed 9.5 million visitors, says Jordi Mestre, head of the Gremio de Hoteles representing the hotel and tourist accommodation sector in the Barcelona area.

More than 75 percent of hotels remain closed and the few that are open barely manage an occupancy rate of 10 percent, leaving many on the verge of bankruptcy and attracting vulture funds.

This year, only 1.5 million visitors have stayed in hotels in the city, 12 percent of whose wealth normally relies on tourism.

In the local press, some are already speaking of Barcelona as "the Detroit of tourism", referring to the fate of what was once among America's wealthiest cities as the capital of its car industry.

"I don't think it's the same situation, although it's true that the sector is going through a very, very complicated time," said Remei Gomez, who runs the five-star Claris hotel in central Barcelona.

Although in July the Claris achieved occupancy rates as high as 50 percent, fresh pockets of infection swiftly ended that, leaving the hotel more silent and empty than ever.

"At this time of day, the restaurant would normally be full of people having breakfast, with customers sunbathing outside on the patio and a lot of people in the reception area. Under normal conditions, the hotel would be full of life, but now, sadly, it is very quiet," she says.

Outside, bellboys are loading a suitcase into the boot of a car belonging to one of its few guests, a German businessman who says he knows the city well.

"It's really strange, I went to the Ramblas this morning and it was almost empty," said Matt Wittberg, 48, after handing his key back at reception.

"I've never seen it like that, it was a bit scary."