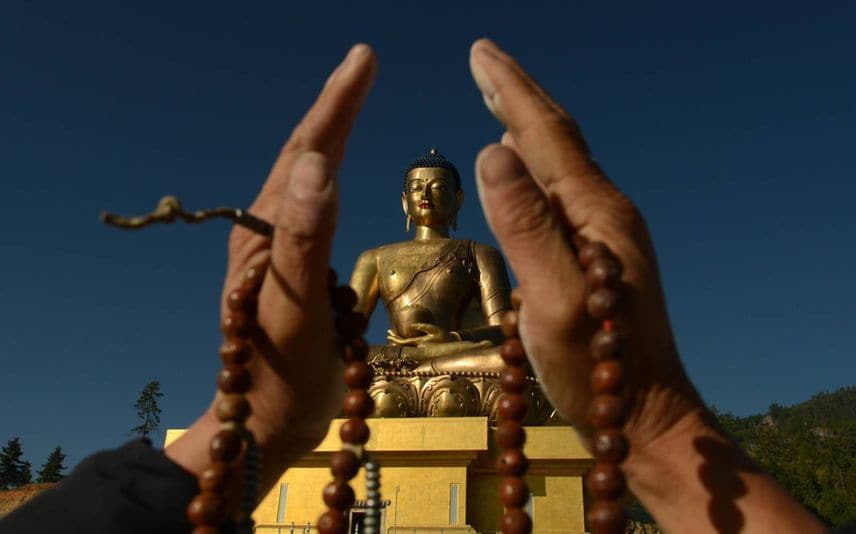 New Delhi: The small Himalayan Kingdom of Bhutan is a landlocked country sandwiched between two Asian powers-India and China. While traditionally Bhutan had been identified as "the land of Buddha", of late, it has managed to carve out a unique space and recognition for itself as "the land of Gross National Happiness (GNH)". The political structure of Bhutan follows the familial model, King as father knows best, the leader must be obeyed and the individual sacrifices for the collective good, articulated on the basis of Tsa-wa-sum (King, Country and People). The roots of all such values lie in the deep understanding of the philosophy of Buddhism.

In this modern age marked by consumerism and capitalism, Bhutan's emphasis for deeper, philosophical, intangible products based on Gross National Happiness(GNH), values, cultural ties, indigenous knowledge, sustainable development, humanitarian assistance, health and happiness is closely linked to traditional Indian values. The relationship between India and Bhutan is 'unique' and 'special' in such a way that India's Prime Minister Narendra Modi paid his first foreign visit to Bhutan after taking over in 2014 calling it as a 'natural choice.'

The early history of Bhutan is strongly connected with Buddhist religion and mythology. Buddhism in Bhutan reached from India in the 8th century BC through the great Indian saint, Swami Padmasambhava. The ancient teacher is regarded as the founder of Tibetan Buddhism and is credited with spreading the Buddha's message throughout the Himalayan region such as Bhutan, Tibet, Mongolia and other nations. He is popularly known as the Second Buddha or Rinpoche, who introduced Buddhism in all aspects of Bhutanese life. There are many significant pilgrimage sites linked with him, such as Tiger's Nest monastery, where he meditated.

Buddhism and its spread from India to Bhutan has made the relationship between India and Bhutan very unique. Both the countries share deep historical, spiritual and cultural ties dating back to centuries and this manifests in one form or the other. Bhutanese recognise India not only as a strongneighbour but also as an ancient State where Buddhism originated with its message of peace, tolerance, and compassion in global politics. Bhutan's relations with India are not based on particular narrow commercial ties but on the cultural and spiritual bond. India is viewed as the land of eight pithas with Bodh Gaya as the spiritual centre. The value of Bodh Gaya for Buddhism is such that it is venerated as "the centre of the world." Foreign Minister of Bhutan, Dr Tandi Dorji, has eloquently described Bhutan's relationship with India, "As the close bonds of friendship we enjoy today, have roots in our deep religious and spiritual connection."Prominent Bhutanese philosopher, Dasho Karma Ura, who conceptualised the idea of Gross National Happiness, notedthat "teachings of Buddhism provide deeper content for relations between the two sides. Diplomacy has come too much in the foreground but in fact, it is this that is far more fundamental than strategic interest."

The Bhutan government looks towards India very positively and has pursued an affirmative foreign policy approach due to "mythical commonality" between both the nations. As a result, both sides have made sincere attempts to expand and foster bilateral ties and have given due considerations to each others' concerns and interests. The Indo-Bhutan relationship is not solely based on government-to-government engagement but also based on people-to-people interaction that makes the ties between the two nations very strong.

The 'Dharmic civilisation' of India has given birth to a number of religions in the world and with the passage of time, these religions have got assimilated into the social fabric of the nations. The development and growth of spirituality, science, art and faith over centuries in the Indian subcontinent had found its way to other parts of the region, earning India a considerable amount of 'soft power' long before the term was coined in western academia. From its cradle in India,Buddhism gradually spread out in many countries such as Bhutan, Myanmar, Thailand, and Sri Lanka, which now accommodates world's substantial Buddhist population.

Guided by the ideal of shared prosperity rooted in the 'Bharat to Bhutan' (B2B) vision, India has identified that the real source of power and energy for the relationship between the two states are the citizens of two countries. The partnership has extended beyond the traditional sectors of cooperation to new frontiers. The Buddhist Circuit was launched by the Ministry of Tourism, India, in 2016 as the country's first transnational tourism circuit, covering sites in Nepal and Sri Lanka as well as those in India. The Buddhist Circuit includes Bodh Gaya, Vaishali and Rajgir in Bihar, Kushinagar, Sarnath and Shravasti in Uttar Pradesh, and Lumbini in Nepal. It isbased on the vision of providing world-class state of the artsfacilities for reverence of Lord Buddha and the holiest pilgrimage sites of Buddhism and has only further cemented the deep bilateral ties between India and Bhutan.

Over the years, Buddhism has acted as a cultural and civilisation bridge between Bhutan and India. The age-old ties between the both countries based on the shared history, geography, religion, culture and tradition has brought out a unique relation unparalleled anywhere else in the world. Both India and Bhutan believe in peace and tolerance and prosperity in the world, inspired by the 'Madhyama Marg' of Buddhism and 'Vasudhaiva Kutumbakam'. In the years to come, the two nations have a great deal to offer to the world, as a beacon of hope to people caught in between balancing consumerism and sustainability.