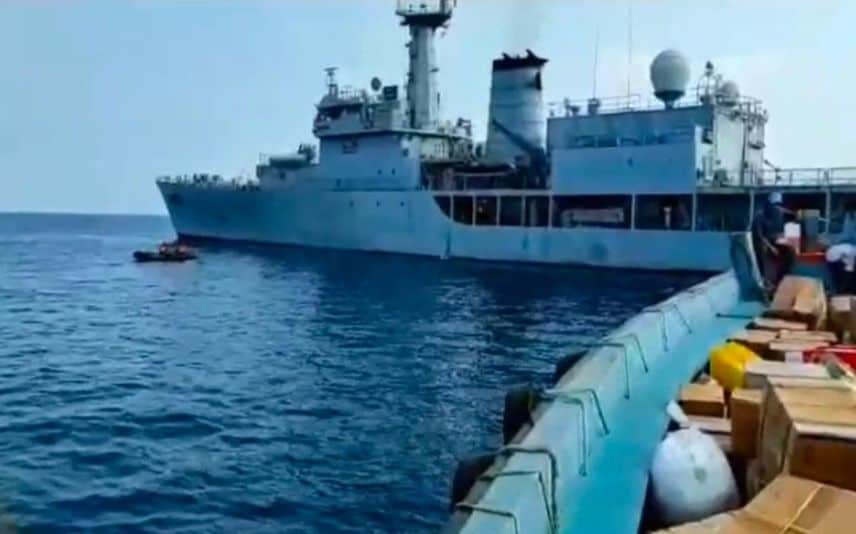 Kochi: Developing infrastructure in the islands of India is in the interest of the country, with an aim to improve connectivity, facilitate tourism and improve the blue economy, Flag Officer Commanding-in-Chief of Southern Naval Command (FOC-in-C SNC), Vice Admiral M A Hampiholi said on Thursday.

Addressing media for the first time after assuming charge of the Naval Command here on Tuesday, Hampiholi said the SNC played a major role in supplying oxygen and medical equipment to combat COVID-19 pandemic in the Lakshadweep islands.

While discussing a wide range of topics including maritime security, Hampiholi said there was a need for a third Aircraft carrier for the nation and the Navy was awaiting approval of the union government.

"Developing the infrastructure of any kind in many islands is in the interest of the country. It's not only the Lakshadweep and Minicoy Islands, but also the Andaman and Nicobar Islands where I would say not only the Indian Navy, the national effort in looking at developing infrastructure in these islands to improve the connectivity, to facilitate tourism, to make it as a hub for contribution to blue economy and to increase our national prosperity and to give livelihood to everyone," the Chief of SNC told the media.

He said the Lakshadweep and Minicoy Islands have the attention at the highest level-- including that of the NITI Aayog.

Hampiholi explained about the various training exercises undertaken in the country and said the Navy has trained over 40,000 foreign nationals from around 45 countries in the last decade.

"Navy ships from other countries often join us in training activities. This is in fact a learning exercise for the nations involved in the training. We learn the different types of ships, the colour of lighting used, the size of beds or bunkers, the mechanisation and many other factors," he said.

On the recent incidents relating to seizure of drugs worth crores from the Arabian sea, Hampiholi said "the vast expanse of high seas are an area of lawlessness".

There are rules and regulations with regard to the ocean and seas. However, there is an area of lawlessness in the vast expanse of ocean-- in the high seas. We are combating drug trades, smuggling, human trafficking and other illegal activities in our seas," he said.

Hampiholi pointed out that the seizures took place due to synergy between various law enforcement agencies and information sharing mechanisms with friendly nations.

"It's the local fishing community which is the eyes and ears of the nation. Nothing can happen in the coastal area without their knowledge. They have been providing a lot of assistance and information to us," he said.

The Navy has arrived at as to what kind of Aircraft carrier it wants.

"We need to have three aircraft carriers is underscore. Now the Navy has arrived at as to what kind of carrier we want. What is being looked at is a 65,000 ton aircraft carrier with electric propulsion with Emmons and Catobar. Emmons would assist heavier aircraft with more weapons which could be launched from the deck of the third aircraft carrier. We are waiting for the approval of Govt of India," he said.

Hampiholi said India will be the foremost centre of par amongst the world whose economic strength and technological capability would need to be underpinned by concomitant military strength of which maritime par is a very critical component.

"And hence the need of a third aircraft carrier with a range of capabilities, with a central identity can perform all naval missions," he added.

The chief of SNC praised the efforts of the Naval officers and other force members who undertook a massive rescue missions during the pandemic.

"The Indian forces, our health care warriors came together for a national effort in COVID-19... Just as the second wave broke out in the month of April-May this year, 10 Indian warships, which primarily do not have the kind of lifting capacity and loads like merchant ships, undertook the risks and eventually transported almost 1,150 metric tonnes of liquid oxygen and almost 317 kilo litres of oxygen and oxygen cylinders from countries as far ranging as from the portion gulf to the south-east asian countries," he said.

The SNC chief further said immense goodwill and the friendship was built during the pandemic time.