Two aged couples have returned after exploring India by road. Interestingly, they sketched the route map of their entire trip on their blue car. Their travels assert that an exuberant mindset is all one required to pursue long journeys.

“Age is not a limit for thoughts and dreams”, reads the quote penned on the car of the two couples.

Kozhikode natives Thomas Cheriyan (66), his wife AJ Celina (62) AK Chackochan (62) and his wife EM Annamma (60) are the couples who found time to take a car ride across India. Among the four, Celina, Chackochan and Annamma are retired school teachers. 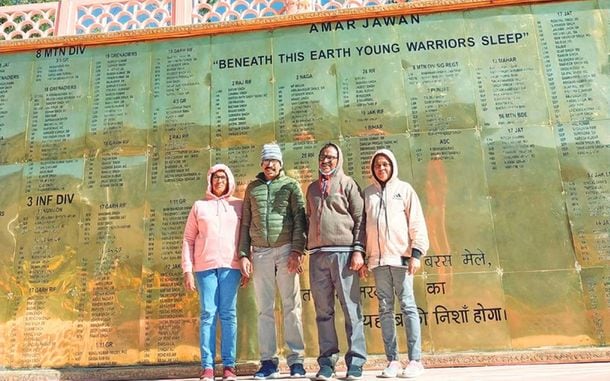 After completing the 44-days-long trip, these four friends returned home by making memories in their retirement life. In an interview with Mathrubhumi, they shared their experience on the trip.

​Being a passionate driver Thomas was behind the wheel throughout the trip which covered over 13,000 kilometres. They set off for the journey on August 28 from Kozhikode's Kallanode. On the return trip, they crossed Hyderabad, Nizamabad, Lucknow, Delhi, Jammu, Kargil, Porbandar, Mumbai, Goa and Mangaluru. At least 300 to 350 kilometres were covered daily and nearly Rs 70,000 was spent on fuel during the entire trip.

" Journey from Leh to Manali was the most challenging one in the entire trip. We had to reside in a tent at minus two-degree celsius when the road got blocked due to heavy snowfall. But we survived the chillness and return the next day by noon," their faces gleamed while sharing the daring experience.

The Malayali army officials who greeted them wholeheartedly after seeing a Kerala-registered car was also an intriguing episode for them in the journey. The couples hope that their travel stories would inspire other senior citizens to pursue their dreams during retirement life.
​
​

One year passed since Shiva left his house ...