French Consulate General in Puducherry Catherine expressed gratitude to Kerala government and the Department of Tourism for the help. 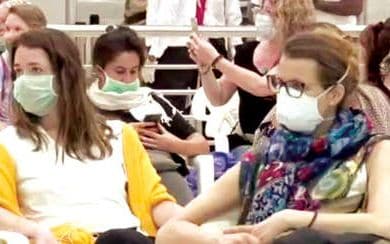 French tourists at Kochi airport to return to their homeland

Nedumbassery: The French citizens, who were trapped in India after flight services stopped as part of COVID lockdown, have been taken to their country in a special charter flight. The Department of Tourism completed the procedures within 24 hours and brought the tourists who were trapped in Kerala and Tamil Nadu to Kochi as requested by the French Embassy. A total of 112 tourists set out to Paris.

A special charter flight of Air India was brought from Bengaluru to Kochi on Saturday morning to take the tourists to their homeland. After completing the checking procedures, the flight took off to Paris via Mumbai. French Consulate General in Puducherry Catherine expressed gratitude to Kerala government and the Department of Tourism for the help.

The group of French tourists included people of different age groups ranging from 3 to 85 years. They arrived in Kerala on March 11 on tourist visa. The Air India flight for their return was chartered by the French Embassy.

There are many French citizens in Kerala who consider staying in Kerala safer than returning to France where a large number of people died of COVID-19. According to statistics, about 200 people from USA and UK and less than 100 people from Russia are in Kerala at present.