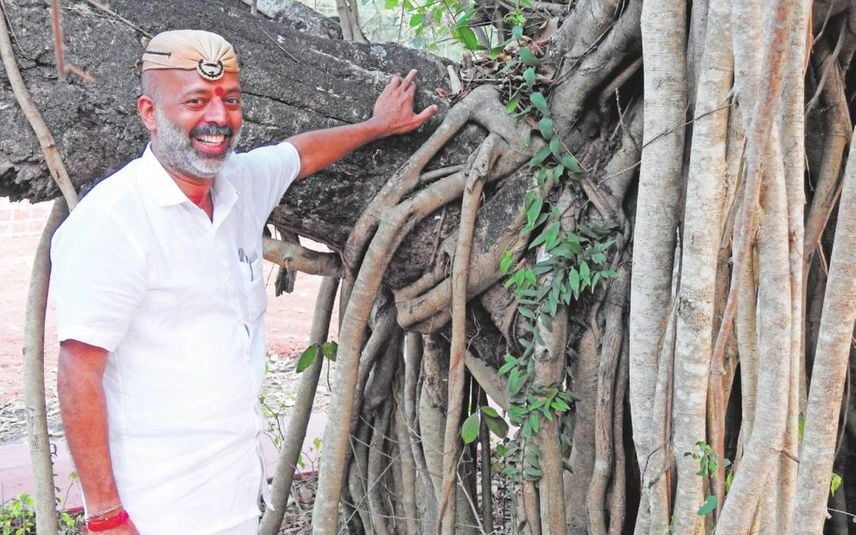 Kasaragod: Kasaragod native Dr R K Nair will plant 5,600 saplings on Friday observing World Earth Day. He has gained the admiration of people after revealing his aim to plant more than one crore of trees across the country. The new saplings will be planted in Gujarat. He is adopting the ‘Miyawaki’ model across 12,000 square feet of land. Almost four feet of rocks were removed and one foot of the thus formed pit was filled with soil. He said that coconut husk powder, glume, earthworm compost and cow urine were also mixed with the soil.

Dr R K Nair is a famous Malayali businessman based in Gujarat. He is the CEO of Aishwarya Exim Private Limited and Sruthi Apparels. So far, he planted nearly 16.5 lakh trees in 88 mini forests across 12 states. For the first two years, the trees were watered twice during summer. The base of the tree was covered with dried hay to retain moisture. Nair clarifies that the roots of the trees will start growing into the rocks below within three years. The Corporate Social Responsibility (CSR) fund is being utilised for plating these trees.

Enviro Creators Foundation co-founded by Dr R K Nair has transformed the 4-acre land in the Industrial Park in Tarapur, under Maharashtra Industrial Development Corporation (MIDC), where chemical waste was being dumped into a mini forest.

2,23,000 trees have been planted on 16 acres of land in Kutch for the remembrance of the victims of the 2001 earthquake. In ‘Shaheed Van’ made for the remembrance of the martyrs in the Pulwama terrorist attack, 40,000 trees have been planted across five acres of land. A total of 1.20 lakh trees are growing on Nargol beach in Gujarat.

Dr R K Nair is the son of Periya Kunjambu Nair and Kamalakshi. The family shifted to Kemanaballi in Karnataka when R K Nair was four years old. His first wife Sreelatha passed away due to blood-related ailments in 2003. Gujarat native Anagha is his second wife. His son Deepak is the director of the Sree Sauparnika Exports Private Limited. His daughter Sruthi is a fashion designer.

While roaming around the world in a massive green van named ‘ Frog’ , the German hippie family of Thorben and Michi are thrilled to explore more roads ..

Elo Ann Fa, a French woman, is now busy travelling across the world. The solo traveller who had not reserved anything for her journeys only has a tent ..

Ponkunnu, a storehouse of a wide variety of biodiversity is being popular as the ‘ Meesapulimala’ of Kozhikode. The location which spreads for acres in ..

Denpasar: A Russian influencer and her husband will be deported from Bali after staging a nude photo shoot on a sacred tree in violation of local culture, ..