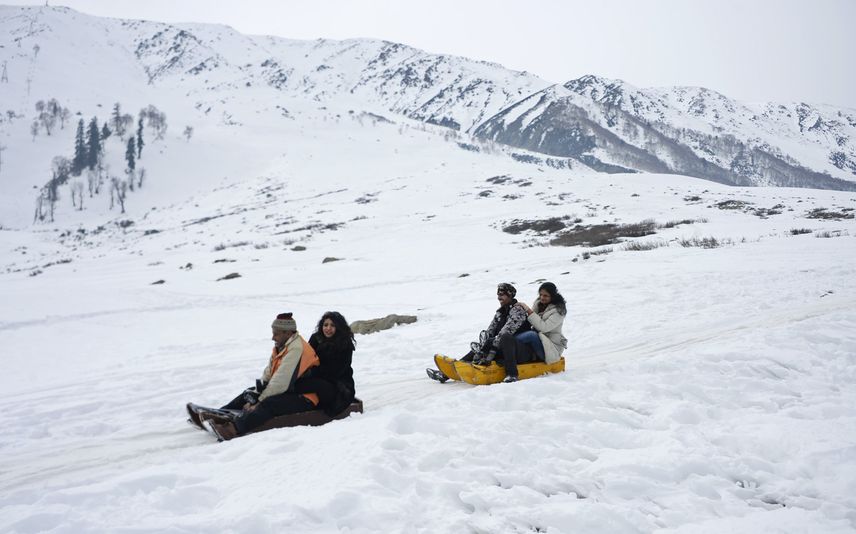 Bandipore: When Danish Nabi alias Daniyal set out for a journey to follow his dreams, little did he know that he would come to be known as the 'Ibn Battuta of Kashmir' for exploring adventure tourism in the Valley.

A 30-year-old enthusiastic traveller, Danish did not spend a single idle Sunday over the last decade as he set out on foot or on a bicycle to explore the Valley, starting from his own home district -- Bandipora.

Danish turned an explorer in his early twenties, same as Ibn Batuta, and hence drew parallels with the famous explorer in the lands of Afro-Eurasia.

Danish has, so far, rediscovered more than a dozen Alpine lakes of Himalayan ranges in Bandipora district, thereby making own little, yet significant, contribution to boosting adventure tourism in the Kashmir Valley after a prolonged spell of dormancy because of political strife.

He said tourism in Kashmir was previously restricted to vsiting a few select and popular locations, including Gulmarg, Pahalgam, Sonamarg and Dal Lake. However, he said the real Kashmir is up in the mountains, which used to draw adenture-seekers from Europe by the droves before the Valley came to be racked by militancy from the late eighties.

Every weekend, Danish sets out on a journey to the mountains on his bicycle or no foot, exploring lakes and meadows and finding previously unknown tourist destinations.

"I have religiously followed my schedule. I haven't wasted a single Sunday. Sunday is my day. Come what may, I set out for a journey every weekend," he said.

So far he has re-discovered more than a dozen alpine lakes in the Bandipora and Gurez sectors of J&K, in the Himalayas, thus lifting prospects of adventure tourism in the Valley.

According to the J&K's Department of Forests, there are 100 Alpine lakes in the Bandipora district but only one or two, including Sheerasar, have been visited by adventure tourists in the past few years.

He has also explored Chota Amarnath and Bazar Hoi caves in Bandipora, Yemberzalwari cave in Sopore, Sheikhul Aalam cave in Budgam and Kalaroos caves in Kupwara.

Danish captures his expeditions on his GoPro camera and posts them on his YouTube channel for the benefit of other adventure tourists.

The 'Ibn Battuta of Bandipora' has explored these lakes multiple times and found multiple trekking routes for future travellers. All the routes have been recorded and geo-tagged by him.

"I do record the trails and treks besides posting them on YouTube for future travellers," he said.

Last year Danish became the first person in India and across the globe to scale Razdaan Top (11672 feet) on a bicycle. He cited his passion for mountain cycling as the reason behind his adenture streak.

He said he chose the Gurez sector for his weekend expeditions for two reasons -- firstly Gurez lies in his home district and secondly it has been ignored by other cyclists and needs to be explored for its immense natural beauty.

He said he is in love with the mountains and explores new locations to promote adventure tourism in Kashmir, besides fulfilling his desire to scale mountain tops.

"In the recent past, tourism in the Valley was only about sightseeing. But there is beauty beyond the meadows as there is a huge potential for adventure tourism which can attract tourists from the west," he said.

He said that during the dark days of militancy in the Valley, adventure tourism came to a standstill and the virgin locations disappeared from people's minds.

"People sitting at home still believe that there is a war raging up on the mountains. But the fact is that peace prevails in the mountains currently," he added.

He further added that after travelling solo to these places he decided to record his travels and post it on his YouTube channel. His posts have received an overwhelming response and more and more people have started visiting these places.

The young traveller said exploring new places as helped locals earn a livelihood. He said after his visits to several lakes in Bandipora, many traveller groups approached him for guidance and villagers found a source of livelihood by serving as guides and providing horses and meals to travellers.

"Kudara residents have formally started providing traditional tea and Makki ki Roti to travellers besides accompanying them on their treks as guides and renting out their horses," he added.

His expeditions and following have earned him many nicknames, including 'Ibn Battuta of Kashmir', 'Mad Man' and the 'Mountain man'. Danish said he loves his nicknames. It is because of his endeavours that the Bandipora district administration in 2020 roped him in as an advisor to promote adventure tourism and a few locales, including Daetwas, Sheerasar, and Nagmarg routes were prepared by the Forest department for trekking.

He said the Valley, especially Bandipora, is a heaven for adventure tourists as everything that fascinates an adventure-seeker is here.

"We have mountains for trekking, two major lakes -- Wullar and Kishenganga for water sports, lush green meadows for site seeing and glaciers. Tourists get everything they want in Bandipora. We just need to highlight these places and I am doing that," said the 'Ibn Battuta of Kashmir'.

He said the new treking routes will not only boost tourism but also the physical and mental well-being of natives. He said a monotonous way of life often leads to growing stress levels in locals.

"I wish people would reserve their Sundays for such travels and work for other days of the week," he said.

"If people can set out for such treks on Sundays, it will reduce their stress levels and help them stay in shape mentally and physically," he added.

He said, "My friends and relatives think I travel every day but the fact is that I travel only on weekends and work on other days of the week."

Danish is a government employee posted at the mini-secretariat in Bandipora.

He added that he idolises Dr Shariq Masood, a noted doctor at SKIMS and an avid traveller like himself, and urged everyone to follow in his footsteps.

He said the doctor has never practised on a Sunday over the last two decades as he reserves it for his travels.

"He could have earned thousands on Sundays but refused as he likes to keep that day for himself," Danish added.

"Doctors usually recommend walks and physical exercises to their patients but themselves work even on Sundays," he said.

Russian tourists mean big money for Goa, but there's a dark side to it