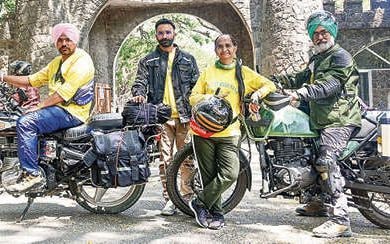 Jagjit Singh Mann and his wife Parminder Kaur with relatives

Palakkad: An elderly couple from Punjab is busy breaking stereotypes of old age by roaming across the country on bike. 61-year-old Jagjit Singh Mann and his wife Parminder Kaur, 60, pick a destination and kick off their trips. This time, they have chosen a journey covering 10 states of India.

The couple arrived at Palakkad as part of the ride which began from Punjab in November. On Sunday, they visited Palakkad fort, Malampuzha dam and garden. Jagjit and Parminder were accompanied by their close relatives Deepinder Singh Mann and Harjit Singh Mann this time. Four of them were wearing yellow T-shirts bearing the name of Jagjit Singh Mann.

They have reached Kerala on two bikes after visiting many locations in Tamil Nadu. They rode through Thiruvananthapuram, Kollam, Alappuzha and Idukki already and will leave Kerala via Malabar region. Their plan was to cover Punjab, Haryana, Rajasthan, Gujarat, Maharashtra, Madhya Pradesh, Goa, Karnataka, Tamil Nadu and Kerala in the current trip. The couple share their travel stories through the YouTube channel ‘Nana Nani Travellers’.

Jagjit Mann was the Himachal Pradesh state director of Nehru Yuva Kendra. He had visited Kerala in 1987 as part of his job and said that he has many friends here. Parminder Kaur is a retired science teacher. They opined that Kerala and Keralites are amazing compared to other regions of India they have travelled. They fell in love with Kerala food too. Their next travel plan is a bike ride to England.