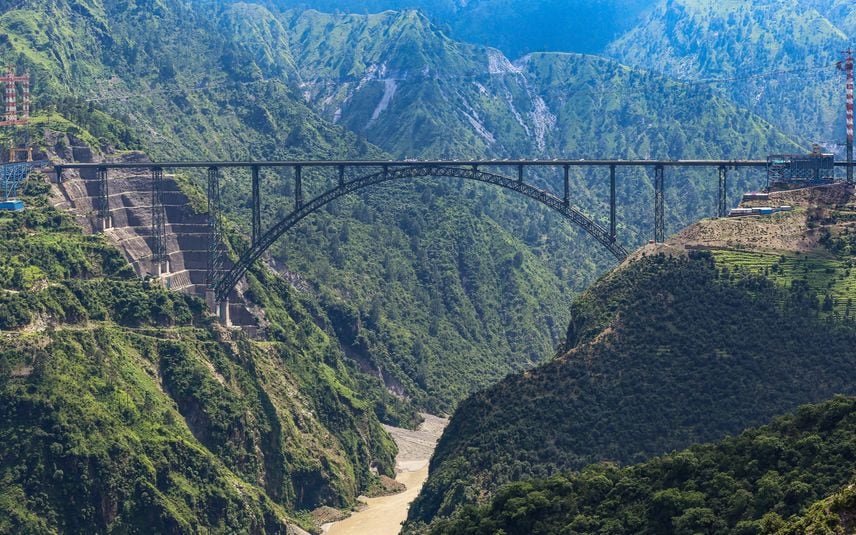 Jammu: Infrastructure projects in the region are taking Kashmir to new heights of development. While India is celebrating 75 years of Independence, Kashmir valley is witnessing two milestones in infrastructure development.

Indian Railways is credited for constructing the world's highest railway bridge - Chenab Bridge in Kashmir, successfully completing the Golden Joint. The Golden Joint is connecting two ends of the deck of the world's highest railway bridge, thereby symbolically connecting Kashmir with the rest of India. Kashmir will also witness inauguration of its first electric train to run between the 137 km Banihal-Baramulla corridor rail link on Gandhi Jayanti (October 2) - another milestone in progress in Kashmir valley.

An Indian engineering feat, the 1,315 metre long bridge forms a crucial link in the 111-km stretch from Katra to Banihal, which is part of the Udhampur-Srinagar-Baramulla section of the Kashmir railway project.

The highest railway bridge in the world, Chenab Bridge is 359 metres above the river bed, which is 35 metres higher than the Eiffel Tower. The bridge is the key link in providing direct connectivity to Kashmir valley. The design life of the bridge is at least 120 years.

Chenab Bridge has already taken enthusiasts by storm. Social media calls it 'connectivity to the paradise on the earth'. During Monsoon, the bridge almost looks like something out of a fairytale drowned in a sea of clouds. The pictures of the bridge look so breathtaking, that Twitterati checked with the Railway Ministry for pre-booking of the train ride!

Chenab Bridge is an engineering marvel as its construction is going on in the face of several challenges. The project was conceived and is being implemented despite the awareness of challenges posed by the geology, harsh terrain and the hostile environment. The engineers and railway officials are at work with commitment and ingenuity despite gargantuan challenges so as to meet the time schedule.

According to the General Manager of Northern Railways, Indian Railways plans to connect Kashmir with rest of country through the railway link by the end of 2023.

This project is the highest altitude railway network in India - defying gravity on the impossible terrain of the Pir Panjal range. Indian Railways' 'Future Ready' railway system will surely go down as the new chapter of J&K's glory, development and prosperity.

Surender Mahi, Chief Administrative Officer of the Udhampur-Srinagar-Baramulla Rail Link (USBRL)project said: "It was a very big project for all of us. To reach here we had to construct 26 kms of approach roads having bridges and tunnels".

Mahi said that defying obstacles and challenges, the engineers at last have constructed the highest bridge of the world and gifted this engineering marvel to the people of Kashmir. This feat, according to him, was achieved with tech support from several prestigious scientific and tech institutions in the country including IIT-Roorkee, IIT-Delhi, Indian Institute of Sciences - Bangalore, DRDO, National Remote Sensing Agency, GSI and other agencies."

The responsibility of connecting the country through railway infrastructure in the dangerous terrain of J&K in addition to the Chenab Bridge has been assigned to Mumbai-based Afcons. The company is building 16 other railway bridges in Kashmir valley, all are part of an all-weather, cost-effective USBRL project, that will be a boon to the local economy.

Connectivity is the key to development. Kashmir was nearly segregated from the rest of the country due to poor connectivity, mainly inhibited by difficult terrain. It was impeding all-round development of the region. Though road transportation was available, it was a tedious journey for the travellers. Thanks to Indian Railways, the rail link will provide round the clock transportation to and from the valley. This cheap transportation will usher new developments in the region as it would facilitate transport across India all local products, especially apples, handicrafts and art products made up of warm clothes and wood.

Though Indian Railways had planned the rail link to Kashmir long ago, the administration has been pushing for the timely completion of all projects since abrogation of Article 370, despite the pandemic-related hurdles along the way.

Railway line is also ushering development of surrounding areas which so far did not have even basic road network. Indian Railways have built more than 205-km long approach roads, which include a tunnel and 320 bridges. 73 villages of the region which were earlier only accessible by foot or boats are now accessible through this railway connection.

The electrification of 137 km Banihal-Baramulla corridor rail link, costing Rs 324 crore, with three main substations - Qazigund, Budgam, and Baramulla - is another boon to the region. It will not only reduce pollution in the area but also save 60 per cent of total fuel consumption at present. The trials on the line were completed on September 20.

Infrastructure development in J&K got a big push after the abrogation of Article 370 and since then, the government has announced a lot of development projects and policies in the J&K region. The sincerity of the Central government in development of J&K could be gauged by the fact 34 per cent of the receipt for J&K Budget for FY 2022-23 estimated at Rs 68,206 crore would come from the Central government as grants. The Central government is continuously pumping monetary resources and taking policy initiatives to rejuvenate the local economy. National Highway Infrastructure Development Corporation (NHIDCL) is developing five tunnels in the region at a cost of USD 3.42 million. The tunnels will have all weather access and will be completed by 2024.

Earlier, the under developed strategic highways had added to the worries of the region's agriculture and horticulture sectors as the movement of fruits took an inordinately long time to reach market destinations. But now that fear is giving way to hope as government is pursuing construction of major highways on priority basis. These connectivity projects are expected to bring development and prosperity in Kashmir along with business and employment opportunities to Kashmiri youths.

Spanish couple travelling in India meets with accident in Thrissur

Varanasi to get heritage museum soon