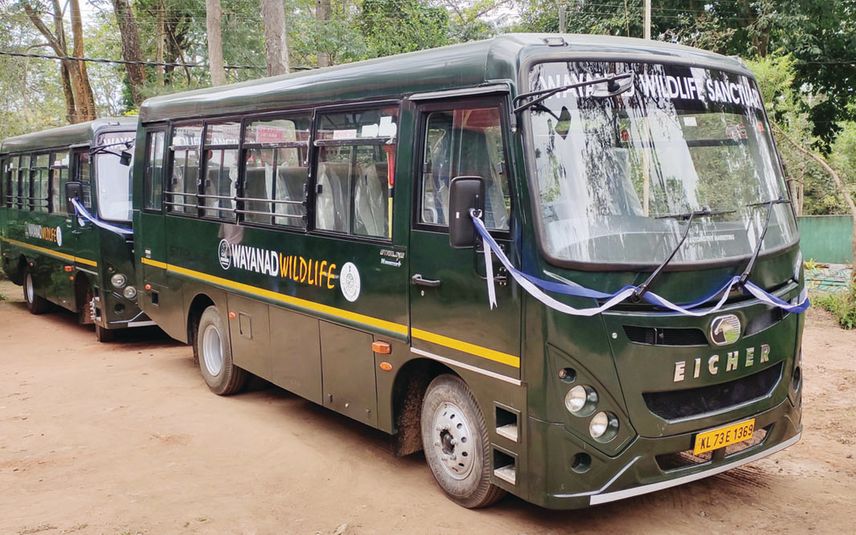 Earlier, taxi jeeps were used here to take visitors for safaris inside the forests. As many as 30 jeeps in the locality under the Muthanga taxi drivers’ coordination committee were permitted to conduct the jungle safaris.

To protect the job of jeep drivers, the authorities have appointed them as temporary staff at the Eco-Development Committees under the Department of Forest. They will be given the charge of driving buses and conserving forests. The jeeps will be taken for rent and utilised for the requirements of the department.

The entry fee and safari charge were revised in Muthanga after deploying buses here. Earlier, the entry fee to Muthanga Wildlife Sanctuary was Rs 160 per visitor and Rs 700 had to be paid for a jeep safari. The visitors could share the expense of safari among themselves. However, the revised rate is Rs 300, which include both entry and travel fee.

At least 23 persons can travel in a bus at Muthanga forest. The 15-kilometre-long jungle safari will be carried out from 7 am to 10 am and 3 pm to 5 pm. The forest department is considering the possibility of extending the time for the safaris. Though the department had completed the proceedings for deploying buses in Muthanga, the proposal was later abandoned due to the protests of the jeep drivers here. The authorities resolved the issues and launched new bus services by introducing agreements which are favourable to both the jeep drivers and the department.

Bus services will also help to reduce the hindrances caused to the free movement of the animals when frequent jeeps pass through the jungle.