I feel over the moon, says Hesham Abdul Wahab, composer of the overnight hit song Darshana

I had this belief right from the beginning that the song had a sort of inner power. The entire project of 'Hridayam' has this positive energy revolving around it. 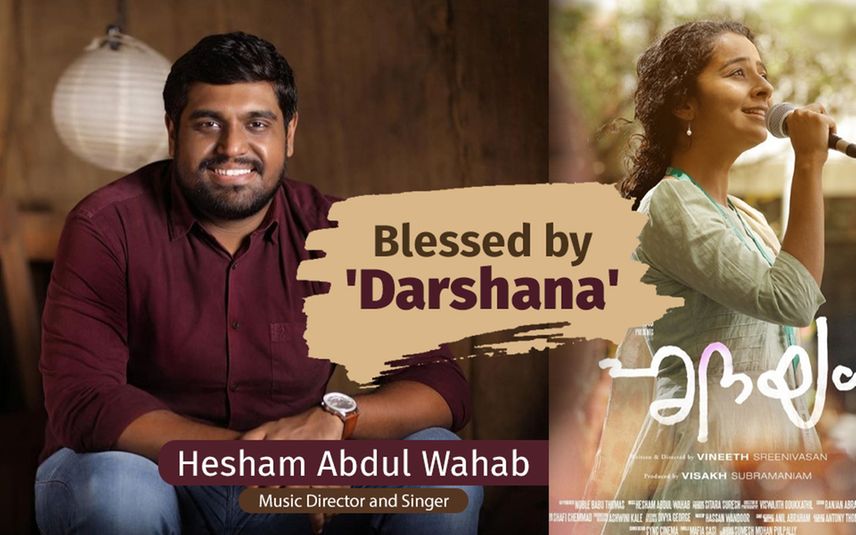 Hesham Abdul Wahab might easily be the most searched name by Malayalis over the last two days ever since the release of the song 'Darshana' from the Vineeth Sreenivasan movie 'Hridayam' starring Pranav Mohanlal, Darshana Rajendran and Kalyani Priyadarshan in lead roles. When asked about the huge success of his latest work, Hesham, the talented music director and the one who sang the hit song, is all smiles and gives credit to the love from people. He shared with Mathrubhumi.com the journey of the song 'Darshana' and about his future endeavours in an exclusive phone interview.

The song crossed 4M views on YouTube within 2 days which goes to show that music lovers have taken it to their hearts. What are your feelings right now with all this love rushing in?

I feel over the moon. The love and support have been overwhelming. I had this belief right from the beginning that the song had a sort of inner power. The entire project of Hridayam has this positive energy revolving around it. I feel blessed beyond measure. It is not easy to bring out a song that reaches out to people this way, and that too during a time like this. It's quite difficult considering the booming impact social media has over the multitude. There is a lot of hubbub going on and we receive myriads of music. To propel through that tunnel of heterogeneity, and to reach out to people is ultimately the result of good teamwork. I have to thank Vineeth for his constant support, Harishankar V who did the mixing, Biju James who mastered the song, Arun Alat who penned the lyrics, Darshana Rajendran who voiced the female portion of the song and many more who worked behind this song.

When it comes to cinema, one has to be lucky enough to get a good director, cast and production team and also a good audio label. I believe that the music label, Think Music India has done a commendable job by promoting the content. We are bringing out audio cassettes of the song as well, which is another aspect that we are all looking forward to.

What is the story behind this song?

The first song that we did for Hridayam was this song, Darshana because Vineeth asked me to work on it first. I composed the song in July 2019. He had mentioned to me earlier that it would be nice to include the name 'Darshana' somewhere in the song. Maybe the inclusion of the name helped in instilling a sense of personal touch and a sort of attachment towards that particular character.

How did you get on board Vineeth's team of 'Hridayam'? What is it like working with him?

I had sung the song Thaazhvaaram from his movie Thira. Interestingly, he sang the song Janah Meri Janah that I had composed for the movie Cappuccino. So, it is safe to say that we had a good rapport going on right from the beginning. It was in 2019 that Vineeth approached me with Hridayam.

He is a visionary when it comes to his work. He knows quite well how and where to place the movie. He also has a clear cut idea of how people would take the movie. He channelizes everything, including music before it's given out to the public domain. He is strict about certain things, but at the same time allows us to work freely. I was able to imbibe a lot of things from him and it is always a great experience working with him.

You were one of the finalists of Star Singer, the music reality show. At that point, did you ever foresee a future where your song would be the talk of the town?

As a musician, I've always had this desire to present music, which is something that I dearly love, to people and see it spread around with magnitude. My grandfather used to do Hindustani vocals. I am still getting trained in Carnatic music, so I believe I am still a student when it comes to music.

What do you enjoy more, singing or composing?

We have a lot of examples of people handling multiple roles, but managing to bring out good results even so and enjoying it as well. I like to belong to that category. People are receiving my songs with love which is a great incentive. I am an audio engineer basically, so that is also my line of expertise. I own an academy named LIVEwithMUSIC Academy which is based in Kakkanad, Kochi. It was inaugurated in 2019. We have been taking online classes for the past several months owing to the Covid situation. We are also doing music therapy for autistic kids.

What's cooking in Hesham's studio? What are your future projects?

I have committed to a few movies, but they are all in the initial stages. Parallelly, the movie Madhuram is all set for release. I composed four songs out of that and I'm currently waiting for them to come out. I've also done a song in the movie Aanaparambile World Cup which will hopefully be out by the end of next week.