The US Consul General in Chennai, Judith Ravin, on a visit to Kochi gets a taste of the eclectic tradition of the inclusive Malabar Coast from Elias Josephai, the managing trustee of the 11th century Kadavumbhagam Synagogue located in the bustling heart of Ernakulam market 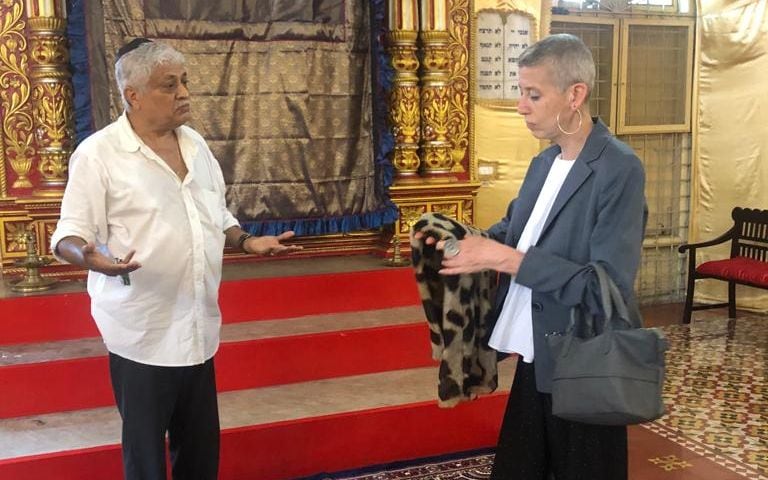 Elias Josephai in animated discussion with the US Consul General in Chennai, Judith Ravin | Photo: By arrangement

Kochi: The Kadavumbhagam Synagogue nestling in the bustling Ernakulam market had a distinguished visitor the other day. It was the US Consul General in Chennai, Judith Ravin. She spent more than an hour in the 821-year-old place of worship rebuilt in the 17th century.

The Consul General was received by Elias Josephai, the managing trustee of the Synagogue, one of the six Jewish places of worship in Kerala. Babuettan, as the caretaker is fondly known among friends, apprised her of the rich history of the 11th century structure. She listened with avid interest to the commercial relations the Jews had with the Malabar Coast, including trade in pepper - an essential ingredient in Egyptian pyramids - ivory, and precious stones from the time of King Solomon.

Elias Josephai also narrated to her the lifestyle of Jews, the observance of Shabbat and Jewish festivals, and the community’s contribution to the city. She was also told of how individuals from various communities contributed towards the Synagogue’s renovation in 2018. As a token of goodwill, Josephai gifted the Consul General a framed picture of the Ten Commandments. Swami Hariprasad of the Vishnu Mohan Foundation, Chennai, which played a crucial role in the renovation, was also present. Also in attendance were Jos Dominic, Taha Ibrahim, P P Mathew, Jonathan, Ofera, and Leya.

Judith Ravin joined the US Department of State in 2003 following many years working in Asia, Africa, and Latin America as an editor, translator, and journalist. The career diplomat has been stationed in US embassies in Peru, Haiti, Pakistan, Dominican Republic, Sudan, Cameroon, and Mexico.