Even as the sinister clouds of war darken the horizon and global media tout grim prognostications of an imminent invasion of Ukraine, a celebrated writer and film personality etches images of the doughty humour and zest for life that animates the population of the capital Kyiv to confront the threat with steely fortitude 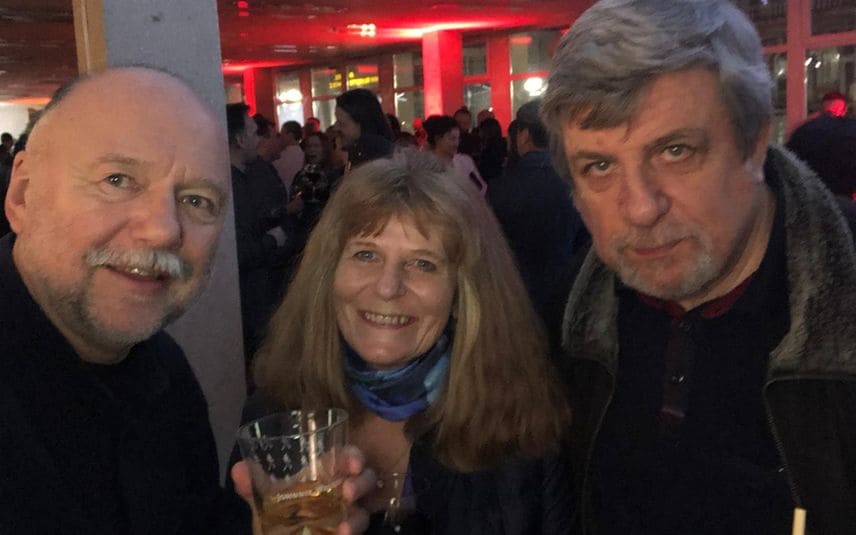 The writer on the left, with wife Elizabeth, and the head of cinematography union Sergiy Trymbach at the premier of Oleg Sentsov’s film, Rhinoceros | Photo: Andrei Kurkov

In the early morning of 16th at 3 am. as Ukraine was expecting an all-out air and artillery attack, music teacher Lena was frantically calling us. Our family friend and the former wife of Georgian artist David Sharashidze has a son, the 25-year-old David, hence her concern. Promising to call back, I told her that Elizabeth and I were at the Cinema Club for the premiere of Oleg Sentsov’s film, Rhinoceros. It is about provincial young men in the post-Soviet 1990s left without a choice but to join the criminal world. Sentsov is a big public figure, who is very critical of Zelensky and supports ex-President Poroshenko.

Arrested by Russians in 2014 during the making of the film, Sentsov exchanged for Russian terrorists and spies in 2019, was given state money to finish the project. Though well directed, the excess of violence didn’t appeal to my wife. After the screening, as we were walking home my wife called Lena and explained that we could figure out what could be done if a war were to start. If not, we could continue with our lives. She refused to be consoled and sent us a link to the channel news where the presenter gave the date and hour of attack quoting US secret service sources.

Though nothing happened, it doesn’t mean that it wouldn’t happen tomorrow. For Putin wants the world to be afraid of Russia as it used to be scared of the USSR. He wants to recreate the USSR empire, wants everybody to think that his country is a superpower and wants everyone to take Russian ambitions seriously.

As yet another tank division from the Russian city of Voronezh heads towards the Ukrainian border and the spectre of war looms, life in Kyiv is strange. Of a piece with is the departure of American diplomats from Ukraine and shifting of the US embassy from the capital to Lviv coming weeks after an announcement that the American University would soon open in Kyiv.

The varsity is located in the building of the former river port on the bank of the Dnieper, our major river. The long strip of verdant embankment has berths for pleasure boats and is dotted with cafés and restaurants. Vernon Smith, a Nobel Prize-winning economist, along with other eminent academics, are major attractions. Classes are to start on March 1.

In Kyiv, all is quiet, with no outward manifestation of panic. People are sick of being afraid of war. The French embassy has advised nationals who have opted to stay back to stock potable water. I heeded the advice and bought a few five-litre bottles. The war in Donbas has lasted for almost eight years. So, we have 400,000 war veterans ready to defend their homeland.

The hunting shops in Kharkiv - a city on the Russian border with 10 lakh inhabitants - are empty, the guns and ammunition are sold out. The joke here is that, as most have dogs and cats, one is not allowed to bring pets into bomb shelters. So armed pet-owners will stay at home to defend their pets!

On Sunday 13 Feb, as oligarchs and their partners were boarding their private jets or chartering planes to leave the country, Ukrainians were debating who should represent the country at the Eurovision song contest this year. The rapper Alina Pash from Transcarpathia in western Ukraine was chosen. It provoked a storm of protest since she frequently visits Moscow and has allegedly performed in annexed Crimea, which for many betrays her compromised patriotism. Subsequently, she has been disqualified.

As the oligarchs were scooting, my friends and I were looking for a place to have Sunday lunch. Popular haunts like Chinese Hello and Pop-up Breakfast Café on Franko Street in the old city centre were packed. After half an hour we located a free table at the Mafia chain restaurant. It was surprisingly quiet. Maybe the clientele was put off by the coexistence of pizza and Japanese dishes on the menu. The restaurant gradually filled with couples, lovers apparently celebrating Valentine’s Day in advance.

Later, Elizabeth and I attended a dinner with the ambassador of Brazil. A friend confided that we should keep an eye on the Chinese embassy. If they start evacuating, it’s a sinister portent, since Russia will definitely alert China before bombing Kyiv, as they are strategic partners now. The Chinese embassy is silent still.

In the meantime, I was checking the net because the British embassy had mailed my English wife warning her and the children to leave while commercial flights were available. Otherwise, the embassy could not guarantee their safety. Since I am a Ukrainian citizen, nobody sends me such solicitous emails. Luckily for me, Elizabeth has decided to stay. As have our sons, Theo, and Anton, who do not wish to be anywhere else.

In fact, we belatedly celebrated Theo’s birthday in ‘Himalaya’, the Indian restaurant. The only one missing was our daughter, Gabriella, who is expected home from London, this weekend. Theo works in an animation film studio and has recently signed a contract until the end of May. The younger Anton, 19, is waiting for the advent of spring to fix a 1974 Soviet Moskvich car he bought a year ago for $800.

While on the subject of birthdays, my friend, President of the Ukrainian Chamber of Commerce and Industry, has invited my wife and me to one of the best restaurants in Kyiv for his on February 19. The war obviously has no place in his thinking!

On 14th I learned that work had begun on a film based on Grey Bees, my novel about life in Donbas grey zone. The location near Severodonetsk is close to the Russian border and is only sixteen kilometres from the front line. A director friend spotting me in a café told me that a special effects specialist he knew was working on the pyrotechnics. That idea at this juncture and so close to the Russia-Ukraine border struck me as bizarre. I wrote an email to the producer asking her to send photos. Much as I would love to attend the shoot, Elizbeth is unlikely to permit it.

That same day I also came to know that some members of parliament, including from Zelensky’s party, had chosen to leave Ukraine. I assume the country will manage without them! Most Ukrainians are staying – some because they perceive no real threat, others because they see the threat and are prepared to defend the country.

One of the deputies, Illia Kiva, an active member of the pro-Russian party, left for Spain saying that he will not return until the danger passes. The danger will not be over until Russia changes its president and international politics. Till then Ukraine should be ready for an attack.

As for me, I keep checking the airport website to see if my flight to Vilnius next week is still available. I am invited to the book fair there and am scheduled to spend three days in the city. Then I will come back to Kyiv. Back to my family in 21/13, Reitarska Street, 200 meters from the headquarters of the Ukrainian Secret Service {SBU}. Close by is Golden Gate - the ancient entrance to the city - and the 12th century St. Sophia, the oldest monastery-cathedral still standing. As is Ukrainian courage and pride.

{the original of the translated Malayalm version published in the opinion page of Mathrubhumi daily dated February 20, 2022}

Poland through the eyes of artist Tomasz Koclega and his 'Inner balance' ...