Ukraine and Russia; war or referendum?

The Kiev-native who writes in Russian fears for the voluntary “surrender” of his beloved country through a referendum, which will absolve President Zelensky and his entourage of all responsibility 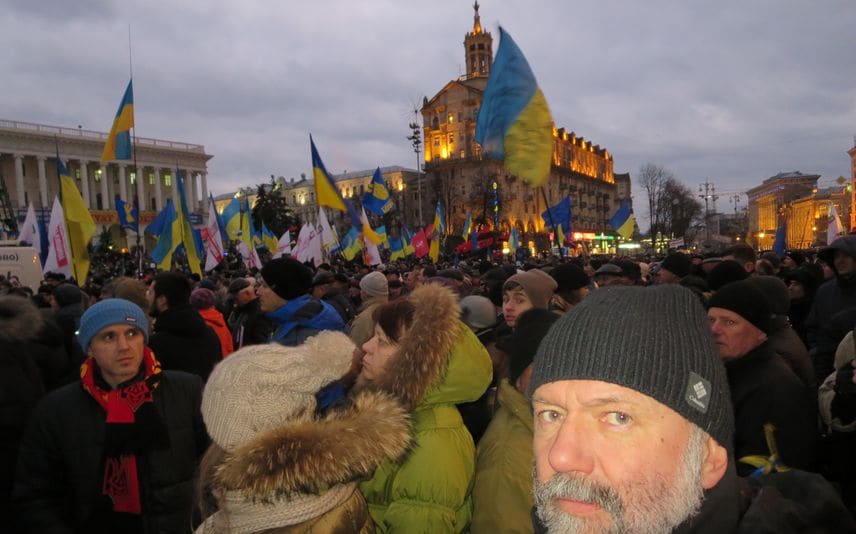 The writer, in grey skull cap in the foreground, is seen expressing solidarity with the Maidan protest of 2014 in Kiev | photo courtesy: Andrei Kurkov

Russia’s huge and threatening concentration of troops on the borders with Ukraine and in annexed Crimea was best seen from space. This is probably why it was noticed all over the world. Hundreds of tanks and aircraft, more than 120,000 soldiers from all over the Russian Federation were moved to Ukraine under the pretext of military exercises. It signaled a threat not only to Ukraine and its leadership, but also to NATO.

For twenty years, Russia has been frightening its citizens with stories of NATO's plans to destroy the Russian Federation. The Soviet Union and its equivalent of NATO - the Warsaw Pact bloc - did collapse partially due to Western efforts, but also partially due to its own economic and political failure. And the other former member countries of the Warsaw Pact have long become NATO member states. Several years ago, under President Petro Poroshenko, the intention to join NATO and the European Union were also included in the Ukrainian constitution. Sooner or later, this may happen, and some military analysts think that this will make a war between Russia and NATO inevitable. However, everything will depend on Russia, not NATO. And in the present tense situation in Ukraine, everything also depends on Russia and President Putin.

The war in Donbas began seven years ago, though for the last two years this conflict is officially considered to be in a state of a ‘truce’. The truce is broken every day. The front line between the Ukrainian army and the separatist military formations is 427 kilometers long. Minefields have been installed along the entire length of this line. There is a high concentration of guns and mortars, with snipers too at work. Sometimes up to 300 ceasefire violations occur in a day. Surprisingly, Ukrainian soldiers are often forbidden to shoot back.

The current escalation began a while ago in early February. On February 3, the Security Council of Ukraine, an emergency decision-making body in times of threat to national security – decided to impose sanctions on the oligarch Viktor Medvedchuk, Putin’s family friend. The Security Council ordered three television channels belonging to Medvedchuk off air. These channels had been broadcasting pro-Russian propaganda for many years and advancing the interests of the Kremlin. Moscow’s reaction was immediate; the number of attacks on the Ukrainian military by pro-Russian separatists increased dramatically.

At the same time, water supply to the annexed Crimea got aggravated. Before annexation, water for the peninsula came from Ukraine through the North Crimean Canal. Water supply has long been a major issue in Crimea, with erratic availability. Post annexation, the canal was closed, and the water situation deteriorated with every passing year. Moscow promised to build seawater desalination plants, but apparently it did not have enough money. In practice, Russia pays for the maintenance of both Crimea and the territories of Donbas seized by separatists. Russia also maintains, at its own expense, the territories seized from Georgia and Moldova. Of late, due to sanctions and low oil prices, Russia's revenues have decreased, and the burden of financing the occupied territories is especially acute.

The so-called “Luhansk People’s Republic” and “Donetsk People’s Republic” are receiving less money from Russia than they need to survive. The only thing that Russia still supplies them generously is weapons, ammunition, and fuel for the military. Two years back Putin hoped that Ukraine under President Zelensky would take these territories back as autonomous regions and shoulder the burden of maintenance. Now, he seems to have realised that this will not happen. This probably led him to say that it makes no sense for him to meet with Zelensky. After several similar statements, the transfer of Russian troops to the Ukrainian border began.

In 2019, having won the Presidential election, Zelensky said that he would come to an agreement with Putin, end the war and recover the occupied territories. Two years later, Zelensky has lost his optimism and has stopped promising anything. In addition, he understands very well that any attempt to fulfill Putin’s demands - the main demand being water for Crimea - will provoke street protests or another Maidan in Ukraine. The movement “No surrender!” is already active in Ukraine. Among the activists of this movement many are veterans of the war in the Donbas. For this reason, Zelensky now has no choice but to sound fiercely opposed to Russia and Putin and to hope for help from the United States and the European Union.

Ukraine’s western allies view ominously the danger of a new war, which could easily spiral into a global conflict. Moreover, the most recent escalation of tensions between Ukraine and Russia has taken place against the backdrop of scandals relating to the actions of the Russian special services in the EU. Recently, the authorities of the Czech Republic and Bulgaria admitted that it was Russian agents who blew up weapons depots in these countries in 2014 and 2015. There is evidence that the destroyed weapons were intended for Ukraine.

Apparently, this time, the United States also believed in the possibility of an outbreak of war. That is why President Biden was the first to call Putin, and after talking to him, he canceled the planned deployment of American warships in the Black Sea, which was planned as a sign of support for Ukraine. When Russia announced the end of ‘military exercises,’ many breathed a sigh of relief. However, the situation has only temporarily improved. No one, except Putin, knows the next steps of the Russian leadership in relation to Ukraine.

The Ukrainian leadership does seem to take seriously the threat of an outbreak of Russian hostilities. This is probably why there is evidence that moves are being made to pacify Russia. Such actions have consequences. Recently, by the decree of the Ukrainian Prime Minister, management control of the North Crimean Canal, through which water was previously supplied from the Dnieper River to the Crimea, was transferred from the National Water Agency to the Ministry of Agriculture. This strange manipulation only indicates a desire to fulfill one of Putin’s demands. Such supply of water would create in Russia the feeling that it is possible now to browbeat Ukraine into make similar concessions beneficial to Kremlin. For the patriotic Ukrainians, however, this step would be tantamount to surrender.

Also, Zelensky signed a decree on the use of referendum, which he had proposed immediately after his election as president, and which was duly adopted by the Parliament. It is very possible that Zelensky will submit the unresolved problems with Russia about Donbas and water for Crimea to a referendum, and decisions will be made based on subsequent results.

In Ukraine, there is a real fear of a war with Russia. A large part of the population does not care whether Ukraine supplies water to the Crimea, even considering that it was stolen by Russia. In addition, most of the inhabitants of the East and South of Ukraine still hold pro-Russian views. Given this, in the referendum, people may well vote just the way Russia wants. And then with President Zelensky and his entourage absolving themselves of all responsibility, the Ukrainian people themselves will “surrender” to Russia.

(Malayalam translation published on May 2, 2021 in Mathrubhumi weekend edition)