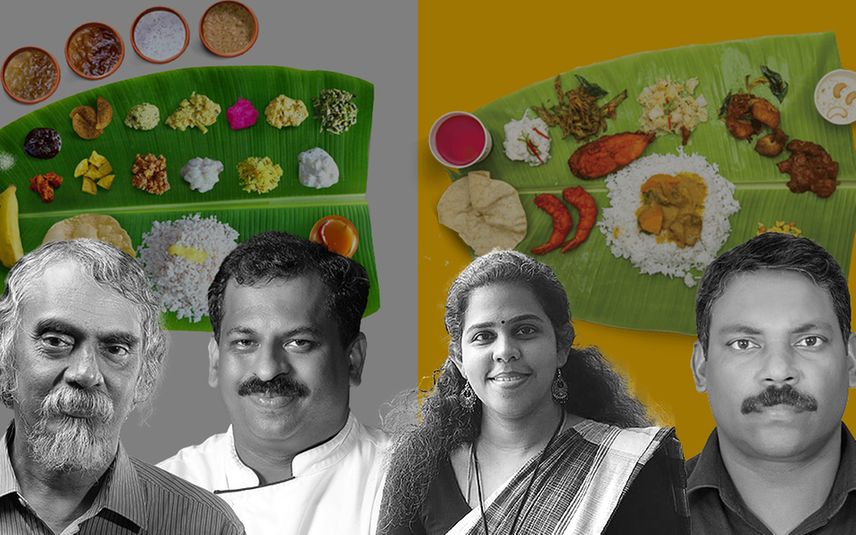 From internet forums to social media platforms, netizens are in two different camps over Onam sadya. One camp says Onam is purely vegetarian while the other camp opposes that idea and says Onam sadya can have both vegetarian and non-vegetarian dishes. Not just in the digital sphere, many individuals in the real world are divided over the matter. Fringe groups and socio-religious fundamentalist groups are seen in action to uphold their own narratives. There are different myths associated with Onam and have different commemorations. Sadya is one among other topics that evokes debate.

The word sadya became part of mainstream narrative after it appeared on food literature of Travancore Kingdom “but recipes in those write ups were something new to the natives here,” said Dr Deepa G, Assistant Professor of History, CAS College, Madayi in Kannur.

“If we look back to history we can see that Tamil Brahmins were brought here for cooking and the dishes have non-native roots. Even Sambar which rules Kerala sadya now has its roots in cuisines of Maharashtra and Tamil Nadu,” she explained the paradox in finding Kerala identity in sadya .

Similarly, sadya once was something limited to Brahminical circles and seclusion was one of the core ideas it subtly propagated, she pointed out."Sadya was ritualistic and maintained class-caste differences for upholding the constructs of purity and esteem. We can see that there were different panthis (rows in which food is served) on the basis of caste-class difference. Pappadam was a luxury then and only a special class was served with it," she added.

According to Deepa, the present vegetarian cult of sadya is another format by which Onam gets ritualistic."Ironically, even Sreenarayana Guru promoted vegetarianism as uplifting people were benchmarked with Brahminical standards. The media portrayal of the present has also normalised the idea that sadya is intrinsically vegetarian. However, Onam is a harvest festival and ritualistic flavours should ideally take a backseat," she said.

Culture critic K.E.N Kunjahammed holds the view that it is important to embrace diversity. “ Extremist views on veg or non-veg food will spoilsport the spirit of Onam.Basically these are choices. The interest varies based on the availability of the items, health conditions and rearing of the individuals,” he said.

K.E.N referred to some interesting practices related to Onam sadya. “In some parts of Kannur, fish is a must for Onam sadya. Some people in the Malabar region make chicken biryani. Across Kerala, many families who otherwise eat both veg and non-veg food, strictly limit the Onam sadya to be vegetarian. Some people will not have any choice and they will prepare dishes with items affordable and available to them,” he said.

K.E.N pointed out that we are eating food for our happiness and not to win the debate. “If people in Travancore and Central Travancore find vegetarian Onam sadya catchy, then let them have it. On the other hand, if people in the Malabar region wish to have fish, chicken, pork or beef or any other non-veg item for Onam sadya, then let them have it. There is nothing like one practice is better or the other practice is bad,” he added.

Dr MB Manoj, poet and Assistant Professor of Malayalam, Calicut University, said that until 2000 Onam sadya had a different format among the heirs of families who migrated to hilly Idukki for farming and allied activities from various parts of Kerala. "Their dishes were leaf-based and composed of tuber crops. Coconut based dishes were not so popular during Onam or otherwise," he said.

Similarly, Onam sadya in areas adjacent to coastal regions have a unique format, he said. His argument is that geography, transportation, occupation and economic conditions can affect food habits and the same will be reflected on Onam sadya too.

Meanwhile, celebrity chef Suresh Pillai gave a bird's-eye view on vegetarian sadya. "It will usually have 25 dishes and they are served in seven different courses. It will start off with appetisers like plantain chips and jaggery coated banana chips. First course will have rice, dal, ghee, pachadi, kichadi, avial, thoran, injipuli (puli inji), pickle, kootukari and theeyal. After that rice and sambar will be served. In the third course, we will have ada pradhaman and banana. Up next paal payasam and boli will be served. In the fifth course fruit or lentil based payasam is served. Following that, rice will be with pullissery. In the seventh course, rice and rasam will be served. After that butter milk will be given. A sadya can give six experiences of acrid, bitter, grass, salty, sour and sweet to our taste buds," he explained.

According to him, from recipes to the way vegetarian sadya is served have north-south differences. "In the southern side people are very particular about the sequence of courses. We can also see variances in preferences and recipes. For instance, in the south, people have affinity for coconut milk and jaggery based payasams, while in the north, people like milk and sugar based payasams," he pointed out.

Suresh also explained about the factors that attract international audience to sadya. "They are fascinated by a course-by-course meal with a variety of dishes. More often, they are here to experience the unique symphony-like serving. Many are curious about the standard operating procedure (SOP) that happens within the 25 minute-long meal. We can actually brand sadya among international audience, especially in Onam season," he said.

Will Adoor’s Elipathayam find a place in Sight & Sound Greatest Films of ...

This prickly creature gave sleepless night to a family in Pattom