It was 14 years ago, Mary Francis, 60 years-old-woman, witnessed her house being razed down by JCBs after returning home from attending the holy mass. Her family was one of the many families forcibly evicted from their homes at Moolampilly in Ernakulam for the rail and road connectivity of the International Container Transshipment Terminal at Vallarpadam (ICTT). 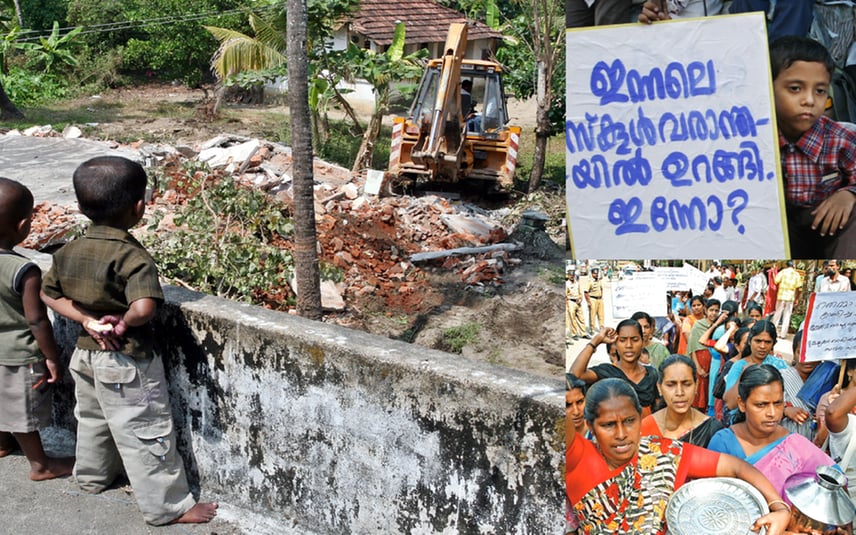 The protests against SilverLine have made people think of what happened to the earlier rehabilitation packages in the state. Mathrubhumi.com examines some of the rehabilitation schemes announced by the government in the recent past.

Despite the state government announcing a relief package worth Rs 13,265 crore, the SilverLine project has met strong opposition from the people. Opposition parties rallied behind locals to remove the survey stones laid by K-Rail officials on private lands in Kottayam, Ernakulam, Kozhikode and other places. Men, women and children held protest marches and made an uncompromising stand against the officials who arrived under the protection of police.

Despite protests, arrests and public discontent, the state government is going ahead with the project and says that all the grievances of the public will be addressed.

It is worth remembering that the term 'rehabilitation' has been a subject of discussion in the state ever since the colonial era. The land acquisition for constructing railway lines during the mid-1800s, Rehabilitation of people for establishing The Fertilisers And Chemicals Travancore Limited (FACT), Aralam Farm Protest, Chengara struggle, Muthanga Land Struggle, Keezhattur agitation and many more have highlighted the importance of the relief, rehabilitation packages. Despite tall claims by the governmental agencies many of the rehabilitation packages have remained incomplete making the lives of the victims invariably miserable.

It was 14 years ago, Mary Francis, 60 year-old-woman, witnessed her house being razed down by JCBs after returning home from attending the holy mass. Her family was one of the many families forcibly evicted from their homes at Moolampilly in Ernakulam for the rail and road connectivity of the International Container Transshipment Terminal at Vallarpadam (ICTT).

"Without prior notice, the officials, accompanied by the police, razed the houses to the ground. They came prepared and acted without any remorse. A child was inside when they started to bring down one of the houses. I still remember that moment. When JCB failed, the migrant workers were called in to do the same," she recalled.

Her family is one of the 316 evicted for the project in Cheranalloor, Mulavukad, Kadamakkudy, Eloor, Kadungalloor, and Edappally.

"They took away everything at the end of the day. Families like ours were thrown out overnight without any shelter and had to find refuge in whatever places we could find. Children, women and the elderly suffered the most," recalls evictees.

Following this, months of protest from the 'Moolampilly Coordination Committee' finally paved the way for a rehabilitation package to be announced by the state government.

The package promised a job for one member of each family and 4.5 to 5.5 cents of land to each evicted family. Rs 5,000 per month was assured as a rental allowance for those evicted till they are rehabilitated. The state government had also agreed to pay a compensation of Rs 75,000 for piling work required for building new house.

However, the promises and announcements have not been delivered completely. The majority of evictees are still fighting to receive the relief package announced by the state government. The value of the land identified by the authorities was only one-third of its original value. Therefore, the evictees claimed that they only received around Rs 25,000 to Rs 80,000 for a cent for their land acquired by the government. Rs 5,000 per month assured to the families also stopped in 2013. Further, the promise of providing a job for a person from each family in ICTT failed to materialise. As of now, no individual from the evicted families received a job in the Vallarpadam Terminal.

The government identified seven sites to rehabilitate the evicted families. Six of these places were marshy lands. So far, 46 houses have been built in these plots spread over several locations. The High Court had directed that basic amenities including water and electricity be provided in a habitable manner, but the evictees from Moollampilly are still living in rented houses. The people enquiry commission appointed by the High Court also identified that families were living without basic amenities and that the most of the affected parties have not received land. The Kerala High Court order that the land allotted should be fit for A-Class construction has also not been implemented.

'The majority of the lands were allotted in Thuthiyoor, adjacent to Kadambrayar River. The land here was converted from waterlogged areas. Therefore, one or two houses were only built here. However, these buildings have been damaged due to the poor condition of the land. Additionally, some of the lands were allotted in areas that require Coastal Regulation Zone (CRZ) sanctions. Meanwhile, some people tried their luck by building makeshift shelters in the remaining land available in Moolampilly itself,' said Hashim Chennampilly- who was part of the protest.

However, some people met more hurdles when they tried to build houses on the plot allotted near lagoons. 'I was given a piece of land adjacent to a lagoon, an area recently converted by filling up sand. These marshy lands are unsuitable for constructing houses. The amount paid by the government for pilling was Rs 75,000. This was inadequate. Additionally, we take loans to meet additional expenses and cover the cost of building a house. My house is still under construction -14 years after the incident,' Mary Francis said. She pointed out that many houses constructed by the government sustained cracks and fell into decay.

SilverLine: Not an inch of land will be forcefully acquired, assures Kodiyeri