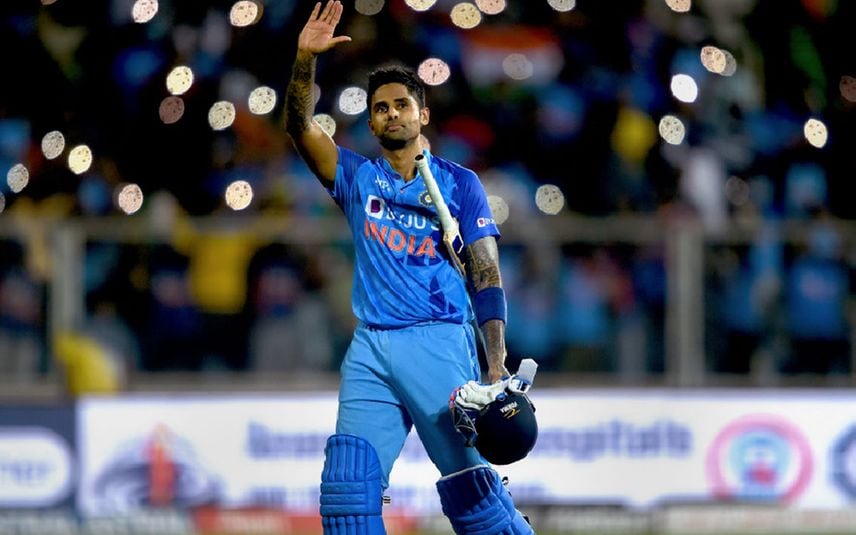 Presently, Suryakumar Yadav is at the peak of his powers. The clever and resourceful right hander has been merrily thumping the ball, hitting boundary shots of the small (4s) and big (6s) variety, running fast between wickets to take quick singles, twos and threes and amassing runs in the shortest form of the game for the men in blues team.

Languishing on the side-lines for a long period of time, Yadav has realised the importance of making the most of the opportunities that come his way with hefty contributions to the team and gain the confidence of the team management and the national selectors.

The Mumbai right hander has been sort of a bellwether batsman of the Indian team scoring 1037 runs in the 33 matches/31 innings he has played ever since he made his debut against England on March 14, 2021 at Ahmedabad.

Moreover, he has featured in 27 wins. After his debut, he is the third highest run getter in Twenty20 internationals after Pakistan’s Mohammad Rizwan (1749 runs in 39 matches and 36 innings) and Babar Azam (1309 runs in 40 matches and 37 innings).

It is difficult to imagine anyone other than the likes of Rohit Sharma and Virat Kohli or even K.L. Rahul unleashing a kind of batting display that is spellbinding to watch for a layman. But the way Yadav has given shape and direction to his Twenty20 career, it can be said he has stolen the thunder from his illustrious teammates. All of his runs (1037) have come in a mere 585 balls, hitting 62 x 6s and 93 x 4s for a scoring rate of 10.64 an over.

It is his prolific scoring in this calendar year — 793 runs in 22 matches and innings — that made his a sure shot for the forthcoming ICC Twenty20 Men’s World Cup in Australia. He has played against twelve opponents and has been most success against England, scoring 260 runs in six matches.

Yadav has virtually made the No.4 in batting order — after Sharma, Rahul and Kohli — his own, collecting 603 runs from 17 innings. He has opened in four innings, batted at No.3, seven times and at No.3, five times.

While the numbers he has delivered are highly impressive and look formidable, it is his style of batting, virtually bordering on the intimidating, that has extracted heavy penalty of the rival bowlers of high quality and helped his team big scores.

In the second international against South Africa at Guwahati on Monday he went on a rampage making a 22 ball 61 with five 4s and as many 6s to achieve scoring rate of 277.27 before becoming a run out victim. In the first match at the Greenfield Stadium in Thiruvananthapuram he made an unbeaten 50 off 33 balls with five 4s and three 6s. Yadav now has a century and nine half centuries.

All attention will be on Yadav during the Twenty20 World Cup in Australia. With 33 matches under his belt and having been a big success, India would place trust on him to give the thrust after the first six-over powerplay. He will be keen and eager to score against Pakistan against which his scores are 11 in the last year's Twenty20 World Cup in the United Arab Emirates and 18 and 13 in the recent Asia Cup in Dubai.

A successful Ranji Trophy coach of Mumbai, Vidarbha and Madhya Pradesh, Chandrakant Pandit who has seen Yadav in his fledgling years says: “Surya has been a natural player from the day I saw him first, the way he bats. The best thing I have observed about him is the way he backs his strength. That’s his mindset. And he has a lot of confidence in his own ability. He is a fearless batsman. He doesn’t bother who the bowler is and what has to be done. He takes the challenge from ball one. That shows his self confidence."

After announcing his arrival in the world of cricket with a bang in his second match against England, when he cut loose to make a 31-ball 57 at Motera, Ahmedabad in March 2021, Yadav has carved a niche for himself in the shortest format of the game. The Twenty20 World Cup in Australia will pose very many challenges and he will be equally ready to face it.