Survivor Friendly Court Rooms, Chapter 5: I, the survivor, testify before the court that ...

All those persons who survive sexual assaults deserve decent and fair treatment. They have the right to a support system, rehabilitation facilities and compensation. Justice should not be denied to these persons who walk barefoot through the burning path of survival. The judicial system should be ready to adopt timely changes and restructuring measures. 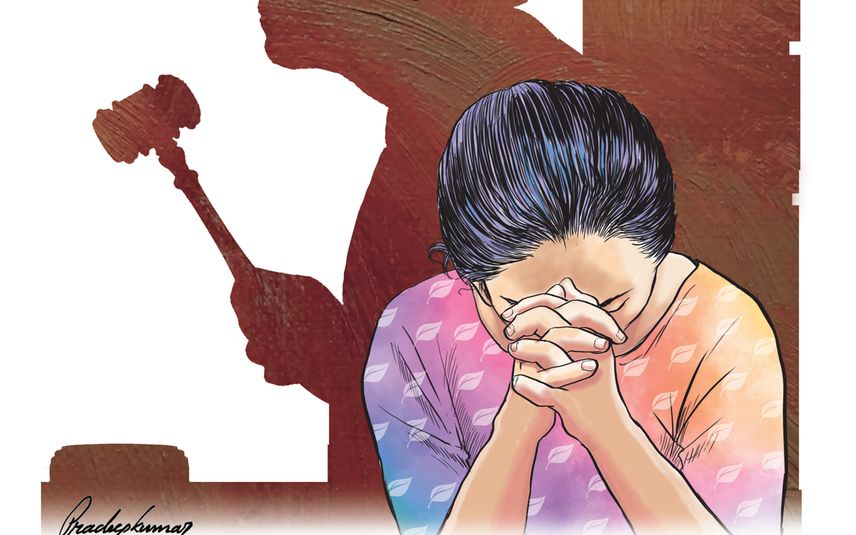 “That incident happened in my life; it is real. But I cannot identify any of these people now.” That is what a gang rape survivor told the judge, breaking down in the courtroom. The trial was going on for years, and because of the trauma she still could not recall many details about that incident. All this went against her in the court.

When the trail lags on, it impacts the evidence considerably. The survivor and witnesses might not be able to recall things exactly as they happened. But, for the court, this is a new case even if the incident occurred many years ago. Though it aims at completing a fixed number of cases every month, such a target is not practical in a highly populated country like India with a minimal number of courts.

The judicial system follows evidence-based practices, so naturally, rape cases are the most difficult ones to prove. The country does not have many organisations to provide expert opinion in such cases, so we rely on forensic report, chemical report and cyber forensic report. A delay in getting these reports is also a reason for the case to drag on. Moreover, the accused, trying everything to prolong the case, would deliberately abstain from the trial too.

Ideally, a Public Prosecutor should appear in court well-prepared, ready with all the points including the testimony of witnesses that strengthen his or her argument. But what really happens is this – The District Government Pleader hands over the file only a few days before the hearing, and so there is not enough time to prepare the argument. Witnesses often meet the Prosecutor for the first time in the court when the hearing is about to begin. And so, the Prosecutor won’t even be able to remind them about crucial points, like dates and places, in the statement that they made years back. When the witness fails to repeat the testimony as given in the statement, it naturally weakens the case.

When politics plays in court

That the appointment of a Public Prosecutor involves politics is a major drawback for the system. The qualification criteria for selection is political rather than professional, and when this happens the prosecution loses its mettle. “To be appointed as a Special Prosecutor, a minimum of seven years’ experience is compulsory. It also needs the approval of the panel of district judges. The selection of Prosecutor for cases involving women and children, and for civil cases should not be based on general criteria. But everything has become political appointments now. When I filed a Right to Information application to get the list of persons recommended by the judges’ panel, I got the reply that the panel was not asked for it,” says Advocate J. Sandhya.

Is the shortage of women lawyers in courtrooms a hindrance for ensuring survivor-friendly environment? That is a natural assumption. But, remember, it was a woman judge who made this derogatory remark to the survivor of a POCSO case – “only because you willingly did it.”
“I used to think that there could be a shortage of women lawyers. But the actor assault case has made it a really serious issue,” says social activist P. Geetha.
And, survivors know this fact from their own experience. That the women who are slaves to patriarchy should be feared more than men.

Rehabilitation: How it should be done

“I have three daughters, and I don’t want even a scratch to pain them. This severe anxiety for their safety has made me a patient. Earlier, when my eldest daughter returned from school, I would examine her body inch by inch. Like crazy I did. I could not trust anyone. Even now, I live through hell till they all come home from school.” This comes from a 40-year-old survivor who was sexually assaulted in her teens.

The society has a tendency to scrutinize everything that the survivor does after the assault. Recently, our moral police were offended when a survivor was seen smiling. In many cases, girls and women are forced to flee from their homes as the humiliation, insult and alienation becomes unbearable. The promise of rehabilitation is completed only when the survivor and her family is brought back to a normal life by giving them psychological and social support. And the authorities should not back away from it by making the society solely responsible for effecting the change.

Our criminal justice dispensing system has many drawbacks. We are still following the outdated Anglo-Saxon jurisprudence or the legal principles of England. It is called the Accusatorial System Based on Adversarial Method, that is, the prosecution has to prove that the accused is guilty. It means we are not chasing the truth but the burden of proof. All that weight falls on the prosecution. Inquisitorial System works directly opposite to this. The accused cannot afford to stay silent and has to prove that he did not commit the crime. Since the burden of proof is less, the conviction rate is higher in such a system. In India, of all the cases where charge sheet is filed, the accused is convicted only in 20 percent. That means either we convict innocents in 80 percent of cases or our system is really faulty. It is high time our judicial system went for a transformation.

We need specially-trained judges at least in fast-track courts.
CCTV cameras should be installed in courtrooms and the judge, prosecutor and the trial procedures should be monitored. And this should be the basis for promotion and other processes.
Stringent guidelines should be formed and implemented without fail.
We need a total rehauling and restructuring; it should not remain on paper.

Survivor Friendly Court Rooms, Chapter 4: She, the one wounded by touch