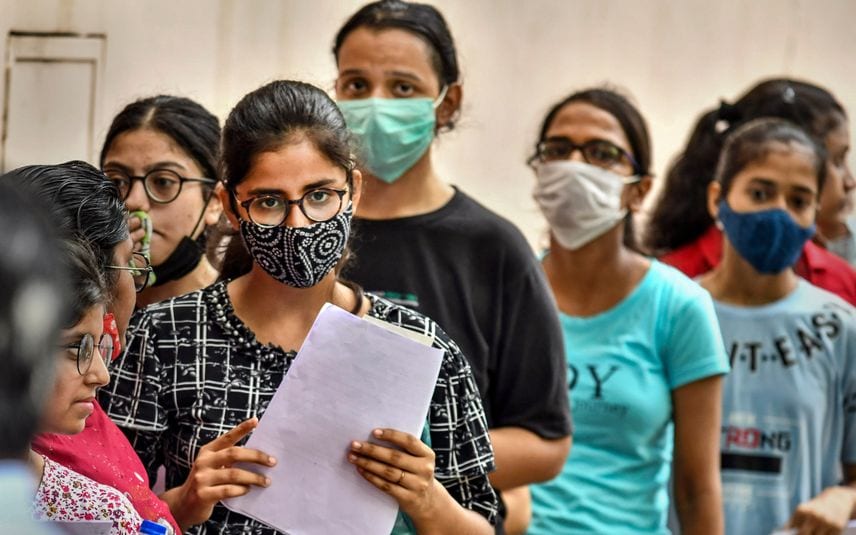 Candidates wait in a queue before appearing for the NEET UG exam, at an examination centre (File image) | Photo: PTI

“I attended the NEET exam in 2017. Though I was not overly passionate about the prospect of becoming a doctor, I had a false hope that if I did happen to clear the exam by some morsel of luck, it wouldn’t be so bad. I could have easily been the least prepared person who was there to attend the exam that day. While all the students were in a complete frenzy leafing through the pages of their study materials, I couldn’t care less and was as cool as one could be. Prior to the exam, the whole lot of students assembled there were asked to form lines and were taken to rooms for inspection. Inside the room, the security officers would frisk you thoroughly and inspect your body with a metal detector, making sure that they don’t leave an inch of your body unchecked. I saw tensed students being questioned about the choice of their clothing, some being taken to the other side of the room that we were in and most of them coming out with a look of distress plastered upon their faces. The next thing I know, I was pulled aside by a security officer, a lady, and told that the buttons on my dress were against the dress code and hence couldn’t be permitted. She went ahead and cut all the buttons lining up the front of my top. Now, I had read the guidelines before heading for the exam. All it said about buttons was that big ones were not allowed. I didn’t think that the small-sized buttons on the dress that I picked for the day wouldn’t make the cut. Naturally, I was shocked by the act of the security officer. It was enough to wear off the ‘chill pill’ that I had taken. Sure, I was given pieces of tape to patch the opening in the front, but did it help? No, it did nothing but fuel my state of extreme self-consciousness. My mind was fixated on how my clothing was held together by just pieces of tape while I attended the exam. I was all the more concerned about other students there who were subjected to the same thing. I could feel all of their consciousness, it was almost tangible. I knew that my life did not depend on that one exam, but most of theirs did. I couldn’t help but sit there, feeling helpless for myself and for others.”

Controversies have been flying over the frisking incident that took place during National Eligibility-cum-Entrance Test (NEET) at the examination centre in Ayoor Mar Thoma College in Kollam on July 17, where several girl students were asked to remove their bras before attending the exam.

The incident came to light after a 17-year-old student filed a complaint with the Superintendent of Police at Kollam on July 18 alleging that she was asked to remove her innerwear before entering the examination hall. Several other girl students came forward with similar allegations, expressing their discomfort after being forced to appear for the exams without innerwear and how it affected them emotionally.

Chadayamangalam Police arrested two teachers, Dr Shamnad and Dr Praji Kurian Issac, who were in charge at the examination centre, in connection with the incident on Wednesday. Five others were arrested over the matter earlier.

National Testing Agency (NTA) has constituted a three-member fact-finding committee to probe the incident and submit the report within four weeks.

The question that arises is, though the NTA that is in charge of conducting NEET has not engaged any ban on any form of bras and hooks, why such a practice was followed in the exam centre? Why were students denied a comfortable environment in which they could write their exams? Why were the students put through such trauma even after all the guidelines listed by the authorities were followed? Why did days' worth of their effort have to be disregarded in such a way?

The girl student who was forced to remove her innerwear before the NEET exam recounted her horrible experience and expressed her distress in not being able to deliver her best for the exam.

“I was asked whether I was wearing a bra with hook. When I said that I was, they asked me to step aside. I saw many students going into rooms and coming back looking all anxious. Those standing outside said that we were supposed to go in there and remove our innerwear. We thought that some kind of arrangement would be made to stack away the inner wears, but they were just laid on top of a table in heaps. When I stepped out of the hall after the exam, there was a huge rush outside the room where the inner wears were kept. It is out of luck that I managed to get hold of mine. Some of the students were standing there, crying. When the students tried to get into the room and the crowd grew uncontrollable, they told us not to wear it from there and asked us to move out of the room. As I was not wearing a shawl, I had to put all my hair to the front while writing the exam. Boys and girls were seated together in the exam hall and it was a disturbing situation altogether.”

Sanam (Name changed), a first-year MBBS student from Ukraine recalls with dismay what she had to face prior to attending the NEET exam last year.

“Being a Muslim student, I always got awkward looks from those on security duty for wearing a scarf over my head. The kind of looks that translated into 'who knows if she's hiding a Bluetooth device under her scarf' even after frisking and checking with a metal detector. They'd ask me to remove my scarf, examine every thread on the scarf and then give it back with the same look of suspicion. Some looks and words, be it small or big, hurt the same and tense us to the core. NEET is such an important exam and we basically devote one to three years completely to it, but the kind of treatment we get during the hours prior to the exam is really terrible.”

“When I heard the news that girl students were forced to take off their bras and write the exam during this year's NEET, it made me uncomfortable. If someone hearing the news gets this uncomfortable, how much trouble must those students have been in? It's really pathetic,” she says.

Dr Prarthana (Name changed) said that around 16 years back, when regular exams were the qualifying exam for medicine, the scenario was much different and that there were no such ‘frisky’ practices involved back then.

“We were just told not to bring phones and watches. I believe that some exam centres even allowed watches. NEET had not been introduced back then and there were only state and national level medical entrance exams.”

Another student who attended the exam in 2018 said that she did not have to face any such incident and was not aware of similar incidents having taken place at the examination centre on the day of the test.

Career Guidance Expert Jaleesh Peter says that such over-the-top practices in the name of inspection that push students to mental distress are disagreeable and cannot be entertained at any cost.

“Cannot entertain denial of freedom and the mental torture that the students are subjected to when they appear for a competitive exam for which they have devoted months of their time and effort. That being said, rules are made to be followed. The students must read and follow the guidelines listed before going for the exam. The students and parents are responsible for following the instructions listed in the guidelines. Everyone is given the same consideration in that matter. The exam guidelines are as important as the exam syllabus. Incidents like this can be avoided by following the guidelines properly,” says Jaleesh.

All the stakeholders involved in the case are now playing a blame game, desperately trying to pin the fault on each other. The police and other independent investigations into the matter will hopefully shed some light on who’s really at fault.

Carrying out strict monitoring and inspection before a competitive exam like NEET cannot be questioned as such, but the extremities that are accepted by certain people in the name of ‘following instructions’ have to be scrutinised. To subject a student to such torture during the exam is equivalent to nullifying that individual’s cumulative effort. One can only hope that such insensitivity does not surface in examination centres ever again.

How to get out of Internet addiction: Here are some tips