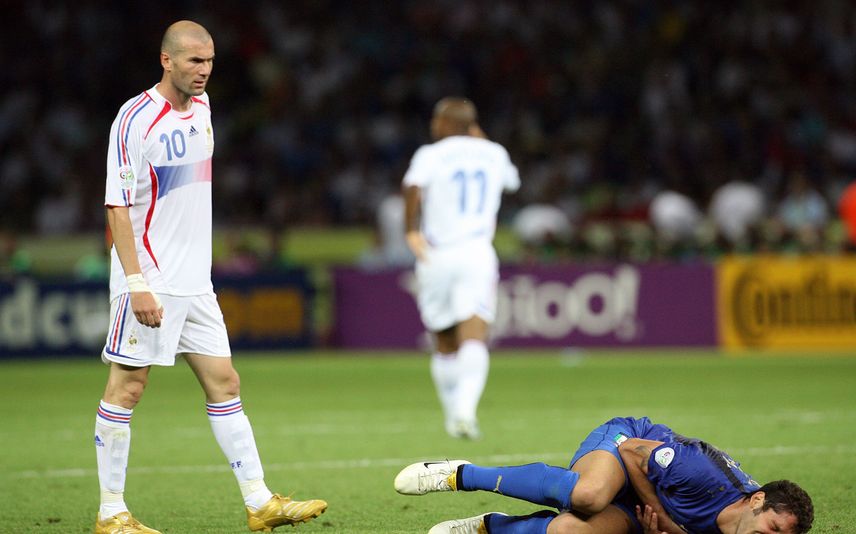 Great players fade away and leave behind a legacy of their sparkling careers. But sadly, at times, the script can go horribly wrong. As it did for that magician with a football going by the name Zinedine Zidane, former skipper of France’s world cup squad and one who helped his country as hosts, winning the coveted Cup in 1998. Eight years later in another edition, this time in Germany in the final against Italy, with the match tantalisingly hanging on a 1-1 draw having gone into extra time, everything happened in a flash. The great man who had till then used his head for all that wonderful goals that millions of people around the globe were privileged to see, suddenly lost it so to say! Zidane head-butted Italian defender Marco Materazzi in a spontaneous show of anger, and the rest now is history.

Materazzi falls, and the Berlin Olympic stadium presented a stunning look with spectators in shock and disbelief. Out came the Red Card, and one of the best players of all time said goodbye to his professional career (he had announced earlier that he would retire after the world cup ) with an unsportsmanlike action in the extra time of the World Cup final! How destiny gets twisted even for someone who was special and ready to be seated among the pantheon of greats in the sport! Today the mention of the name Zidane brings to memory not immediately of his sparkling ball play and goals but this unsavoury incident. Such an irony! The incident instead had become one of the legends of World Cup clashes.

Poor Zidane did not deserve this finale at least for the joy he had brought until then to millions and millions of fans the world over. The 1998 World Cup was a story for him as France went on to register its maiden success in this competition. Beating a force like Brazil is never an easy task, but what Zizou, as Zidane is popularly called was unstoppable. Gliding and dancing around with the ball always virtually glued to his feet, the French star made circles around the Brazilian rivals, which included such great names in the game as Ronaldo, Rivaldo, Bebeto, Roberto Carlos, Cafu and Dunga! If he was unable to be in the scoring range, his deceptive runs and passes would ensure his colleagues were there to attempt the kill. In the final, it was his header that brought up two goals of the three that France scored to mete out one of the heaviest defeats to the powerhouse that Brazil was always considered. Zizou became a French hero by then and was deservedly rewarded soon with the Legion of Honour, the highest French Order of Merit.

A difficult childhood was not an ideal setting that Zizou faced, often given to tantrums over racist remarks (he happened to be of Algerian descent), but soon his energies were getting channelised into football and the young talent began to bloom. As a 14-year-old, he was enthralled by the magic that Diego Maradona was doing on the football fields, and the 1986 performance by the great Argentine made a significant impact on him. He had conceded then that Maradona was at a different level, but years later, he was to prove his worth with plain brilliance that was to earn approbation the world over. Perhaps even Maradona himself. From French clubs, he progressed to Italy’s Juventus, made his mark with titles and thereafter to Real Madrid on a record transfer fee of 150 billion Italian lire! It was here in 2002 that he came up with what experts considered was the greatest goal of the champions league. It came about in the match against Bayer Leverkusen in the final when Zidane belted a left-footed volley from the top of the box into the goal like a missile! This, after his 1998 World Cup heroics, had further confirmed his exalted status in world football.

But then, just as he rose, so did he slip from the high. The 2002 World Cup saw him caught in an injury wrap of his thighs that left him for the best part and also ran in the team. France slipped with him and went out of the World Cup in the group stage itself. The 2004 Euro Cup too did not prove different, and Zidane by now was dejected enough to announce his retirement from international football. However, with several senior players retiring and France struggling to qualify for the 2006 World cup, Zidane was persuaded to reconsider his retirement decision by then coach Raymond Domenech. Returning as Captain, Zidane was back to what he did best, score goals and lay the path to victories. France chugged ahead to reach the final, but that glittering career’s worst moment was to confront this gifted player soon after.

The world of football moaned the French in particular. Yet, in France, Zizou remained a hero notwithstanding what happened. But deep within him, the great man knew the damage he had done. Perhaps that is why he decided straightway not to enter the field anymore as a professional player. What is more, for a touch of atonement, he took part in community service with children in one of FIFA’s humanitarian projects. How the mighty fall!