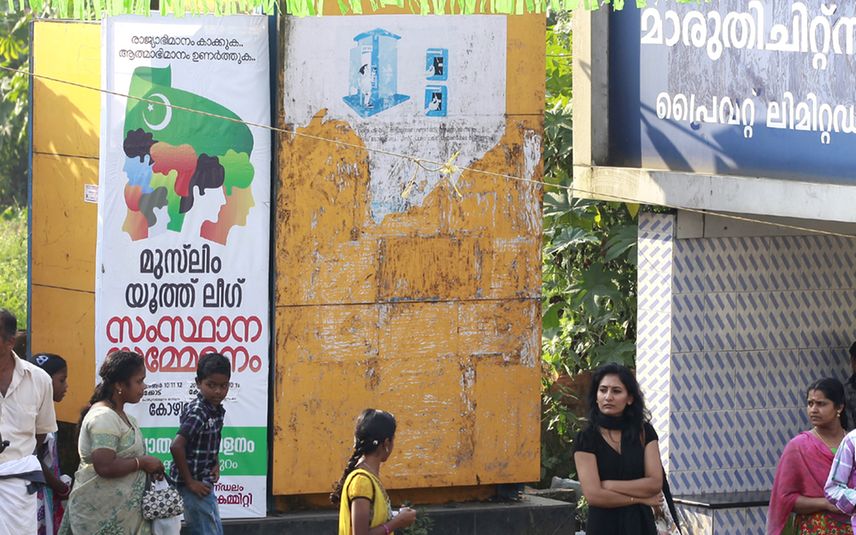 Women waiting in front of a public toilet | Photo: Mathrubhumi

Four girls on a busy night rushed to the washroom of a prominent hotel in Kozhikode city. All four of them had to urinate and one among them was menstruating. The girls had to wait for their turn to use the bathroom sipping a coffee not because they were thirsty but because that was the 'rule'. The same happened with a lawyer whose wife was pregnant and had to use the bathroom while they were travelling. They had to sit for some time in a restaurant on the highway and order a cup of tea just to use the bathroom.

This plight indicates the lack of proper public toilets in Kozhikode city. The women here have to depend on nearby hotels and restaurants in the city to answer the call of nature.

E toilet, a piece of comedy

12 years ago, hundreds of women marched to the streets of Kozhikode, demanding proper public toilets for the women employees working in the SM street and other unorganised sectors here.

As a result, a few e-toilets came up in the city. However, all of them are non-functional and remain show pieces amid the city now. 'E-toilets were just tokenism to stop the strike. They were not functional from the beginning itself. The only public toilet near Mananchira is a Sulabh toilet on PM Taj Road. All the workers in the street depend on it.

Men can easily urinate if there is a wall in any corner. But for women it is difficult,' responded Viji Penkoottu, human rights activist and founder of Asanghaditha Mekhala Thozhilali Union (Union for workers of unorganised sectors).

In the latest anthology movie 'Freedom Fight', the movie 'Asangadithar' directed by Kunjilla Mascillamani discusses the strike for the urinal and the hardships that women had to face.

Viji also added that the most tragic matter is that even after 12 years, the condition remains the same in the city. 'Women continue to suffer to do the basic natural thing, to urinate, living in a self-proclaimed developing city.'

'Non-availability of ladies toilets is a matter of concern for women. The public toilets charge Rs 2 to urinate and if the user takes any few more minutes, the person sitting in front of the toilet charges Rs 5 telling that I was not using the urinal but latrine,' said Kabani Haridas, theatre-cine artist and social activist.

Kabani also added, 'let the toilets be paid or unpaid and new or old-fashioned, we need a clean usable toilet. The maintenance is the problem. Years back, women had to bring bottles or mugs from home, urinate and carry it back home to dispose off. How difficult and cruel it is?'

In 2016, the State government declared Kerala as open defecation free (ODF) on November 1. As part of the project, Kozhikode District alone has taken up the mission to construct 16, 551 toilets, of which 13,605 would be in 70 grama panchayats and the remaining 2, 946 in municipalities and Kozhikode Corporation.

But Kozhikode Corporation in all these years could only construct less than 400 toilets and other municipalities have reported constructing fewer than 250 toilets. And only 3 are functioning now.

Many more 'modular toilets' will come up short. We are going to implement a project called 'Take a break'. The facilities will be of a high standard like that in Airports. The one that we have shown in the Corporation office was highly appreciated and approved by all.

Dr Jayasree added that 100 public toilets at roadside restroom complexes will be set up along the national and state highways with modern facilities under the leadership of the local bodies. The toilet and restroom complexes, including coffee shops, will be established with modern facilities. The modular toilets will be made of steel. 'We have formed a committee of architects and engineers and the plan is in its final stage. It will also ensure hygiene and safety standards for women and children.'

'Take a Break' is a scheme announced as part of the Nava Keralam Karma Padhathi. All toilets will be equipped with sanitary napkin disposal systems, bio-waste storage systems and disinfectants. It will be under the leadership of Haritha Kerala Mission and Suchitwa Mission. Kudumbasree workers will be in charge of the maintenance.

The proposal about it was envisaged in the annual plan programme for the financial year 2019-2020. But due to technical constraints, it has been pushed to the upcoming plan. Tenders will be called to run the toilets. The toilets will be pay-to-use.

The corporation plans to associate with cooperative banks, voluntary organisations, and industries to set up eco-friendly toilets. The civic body has set aside Rs 10 lakhs in the budget for the construction of toilets. The toilets in hotels can be used by the public but there are legal issues. We cannot claim free usage of toilets there. But since ladies and children depend on the restaurants and hotels, we are planning to mandate the approval of plans of new hotels and restaurants only if their plans show a public toilet outside their building.